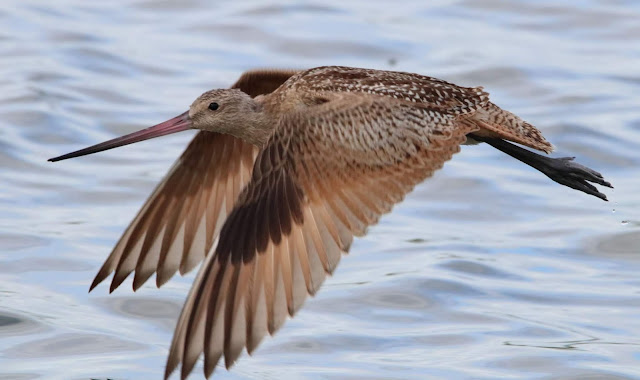 On Sunday morning early I drove from Newburyport through Boston (should be done before 0700 on Sunday) to the south shore and then onto Cape Cod, always a great destination in late August and early September for so many reasons.

Atlantic view of the Lighthouse facility

I was headed to Cape Cod for shorebirds, seals, sharks, and whales... I camped that night at Dune’s Edge Campground just on the outskirts of bustling, festive Provincetown, out at the Cape’s very tip.
After setting up camp, I headed out to Race Point Beach, on the northern shore of the Cape, to see what was up...  A lot was up! Humpbacks were feeding in numbers offshore, and seabirds were swarming over them—a nice combination.

I was able to scope out Corey’s, Great, and Manx Shearwaters in this frenzy. Also Minke Whales were moving around, and I could see them breaking the surface and showing their curved fin. But I was amazed to see 4-5 Humpback Whales blowing at once from my perch on the beach, that was new for me—seeing all this activity from shore. 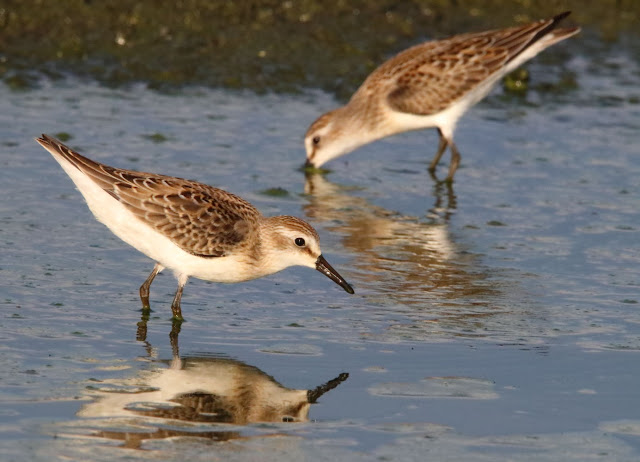 The next morning I drove to Chatham to meet with the Fish & Wildlife Service’s Eileen McGourty to obtain my special use permit (as a research scientist) and to finalize details of my visit to South Monomoy Island. I will boat out there on Tuesday and stay through the Holiday weekend and be picked up the following Tuesday.

By Tuesday at noon I was on South Monomoy, and had met the Mass Audubon bird-banding crew—Nicholas Dorian, Tucker Taylor, and Nancy Ransom. They were scheduled to depart the island the next day, leaving me alone on this “desert” island. They were going to brief me on the ins and outs of Monomoy.

This afternoon, I joined the banding crew at the Powder Hole, as they did a count of the birds at this famous hotspot. It was literally alive with birds—gulls, terns, and shorebirds... This was where I would be spending a lot of time over the next week!

On this evening, we set up scopes with the setting sun to our back and scoped every last bird. This count would go into the system via Mass Audubon. The banding team did a varying survey every day... 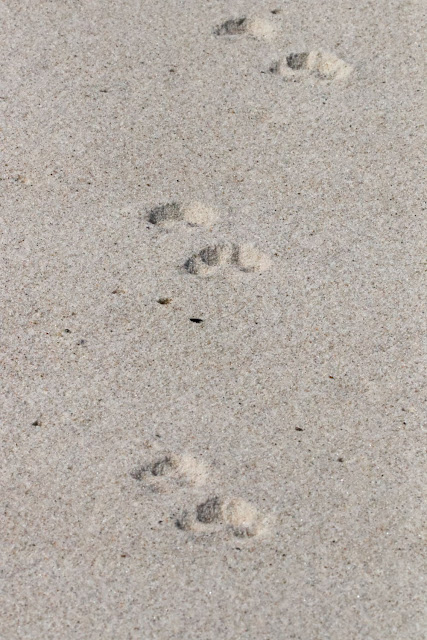 My week of surveys focused on the Power Hole and the two beach fronts—bay and ocean. I did lots and lots of walking over the week, mainly counting shorebirds.

A fock of dowitchers on the move

Monomoy is one of those most famous birding locations in New England, much like Plum Island. In fact, I had my first visit to Monomoy in early September 1969, exactly 50 years ago. On that wonderful birding day, I added 7 birds to my life list, including Hudsonian Godwit, Western Sandpiper, American Golden-Plover, and Wilson’s Phalarope—all birds I would see once again on this current visit.

sunset from the lighthouse

In the 1970s, the Mass Audubon ran birding tours to Monomoy. At that time, Monomoy was a single island, and was easily accessible by boat from Chatham. The Audubon people had an old dune buggy that could carry 10 birders, and they trundled down and up the island, to all the best birding spots.
These days Monomoy is 3 islands—North Monomoy, South Monomoy, and Minimoy. The access by boat is much more difficult because of the ever-shifting sand shoals. 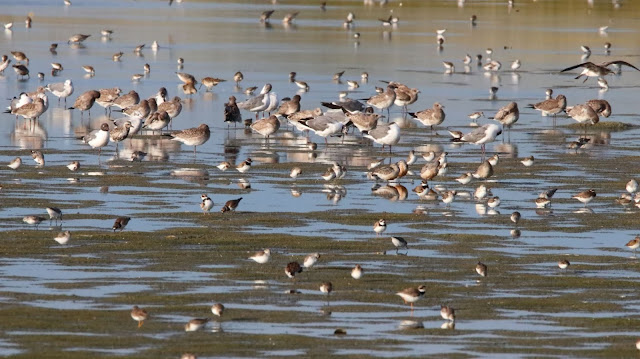 shorebirds and gulls at the Powder Hole

On the southern “bulb” of South Monomoy, there remains an old lighthouse and its lighthouse keeper’s house. This is where I stayed. This recently-restored facility is no longer providing light for ships, but instead is used as a research base for the likes of the Mass Audubon bird banders and myself. 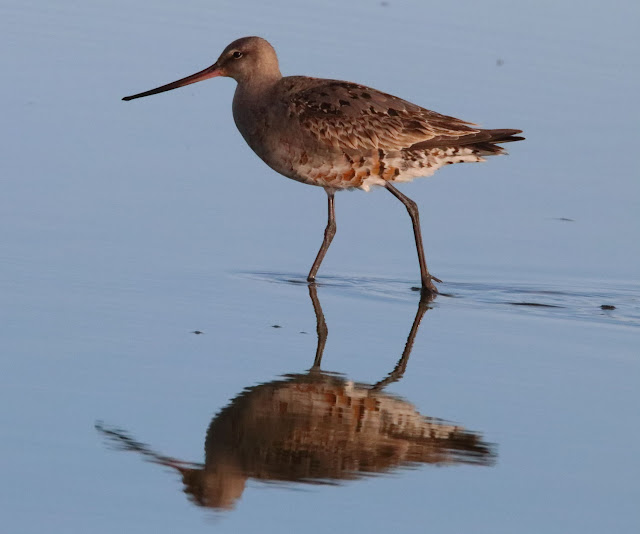 I was on South Monomoy because historically, Monomoy has been the “last stop” for the migrating Hudsonian Godwits, who touched down here before launching out over the Atlantic for the nonstop multi-day flight to South America. 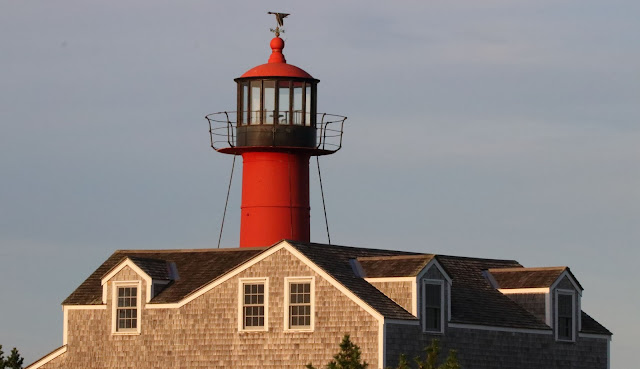 Close-up of the lighthouse

Not as many godwits seem to stop over as they once did, but I wanted to experience this important place in the godwit’s story. 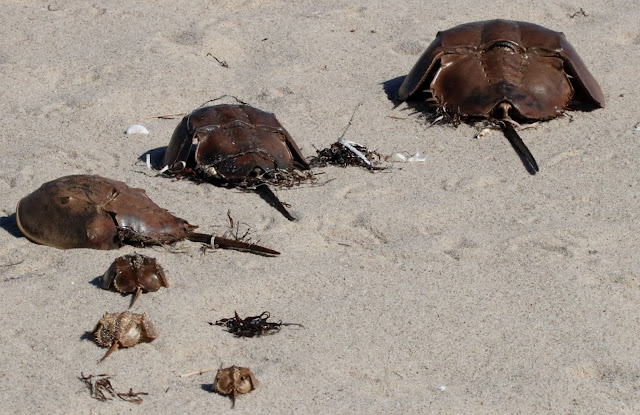 So I was out looking for godwits every day. First, I came upon a single Marbled Godwit, settled into the Powder Hole. 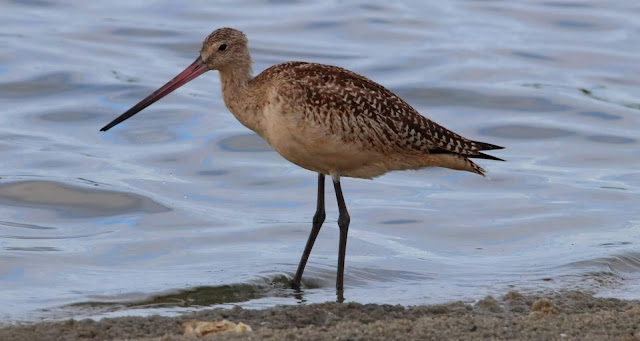 Marbled Godwit on a stopover in the Powder Hole

A couple of days later, I watched as an adult Hudsonian Godwit winged down into the Powder Hole, exactly a half-century after I saw my first HUGO here on Monomoy. This was a bit like my experience with the Whimbrel on Schoodic Peninsula the week before...

Hudsonian Godwit loafing amongst the dowitchers and Red Knots 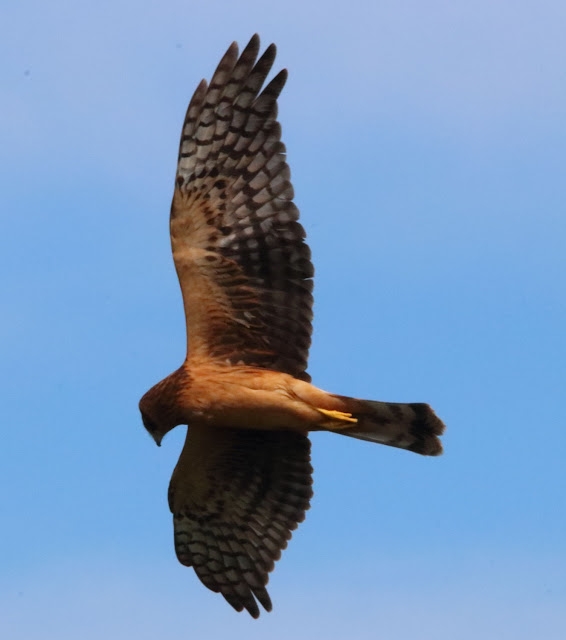 Northern Harriers were the common resident raptor on South Monomoy, seen many times a day. Often chasing                       shorebirds, but never catching one...

This godwit spent three days on the island before disappearing, perhaps on its lonely flight south across the Atlantic. Presumably it passed east of Hurricane Dorian, which was brewing in the Caribbean at that time. 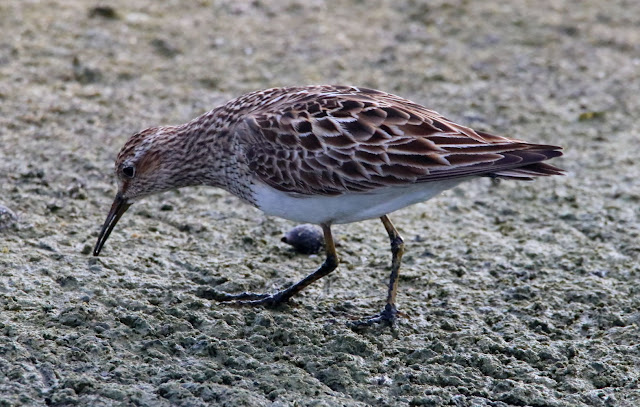 There were plenty of other shorebirds to study, count, and photograph. Monomoy remains a great stop-over site for these southbound migrants. The Powder Hole has become a favorite feeding site. Standing amidst the shorebirds there, the sound produced by the birds is remarkable—a SurroundSound of Semipalmated Plovers, Semipalmated Sandpipers, and six or seven other noisy species.

I managed to see all the species I first had observed here in 1970, which was a source of satisfaction.
Next will come part II of my Monomoy Blog... stand by! 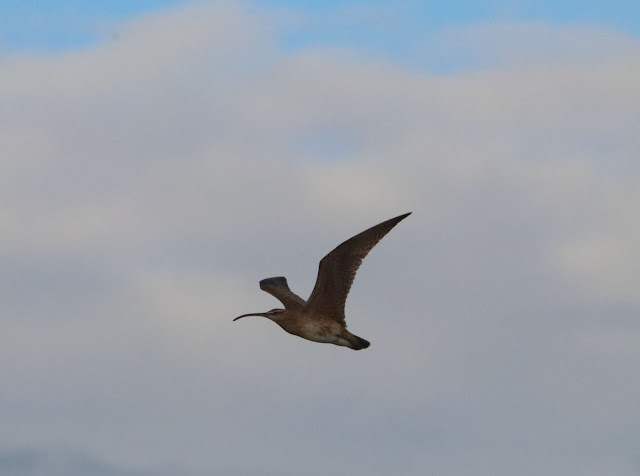 Whimbrel crossing the island. This species was seen daily.

Posted by Bruce Beehler at 9:34 AM