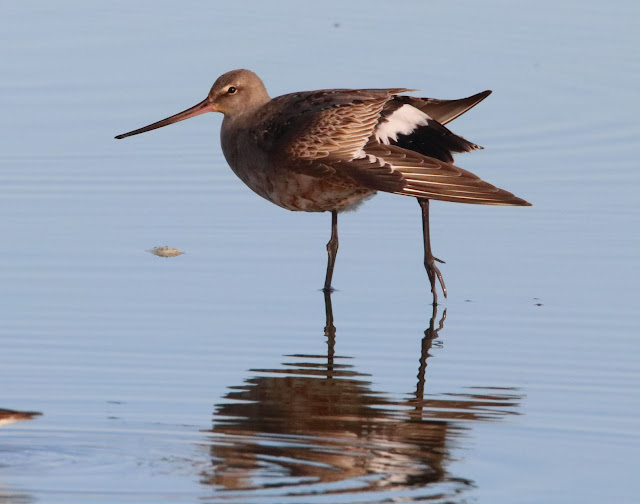 One thing I forgot to report in my last blog was that when I was ferried out to the island, we departed from Stage Harbor in Chatham. This is a gorgeous natural harbor surrounded by beautiful summer and year-round homes tucked into wooded hillsides. The surprise was finding two adult Peregrine Falcons hunting birds over the harbor. They glistened in the bright sunlight of the morning as we slowly wended our way out into Nantucket Sound. 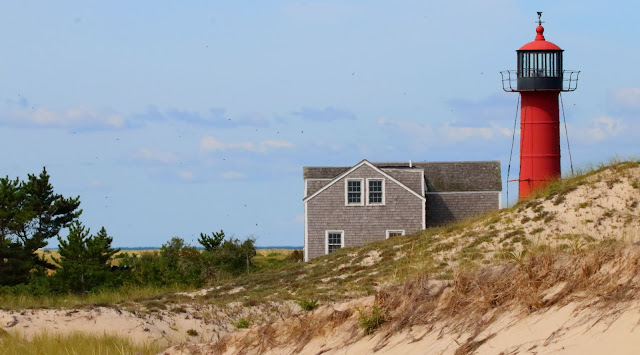 Beach view of the Lighthouse facility, where I was based...

One arrives on the Sound side of South Monomoy, on a beach landing about a half-mile from the lighthouse. One then learns something about the island vegetation. The sandy trail to the lighthouse is, in many places, fringed by abundant vines of Poison Ivy, with leaves turning red with the arrival of early autumn. Some parts of the island were “no go” to me because of the barriers posed by this noxious weed.

The lighthouse from the far north of the island, on the Atlantic side... no people...

Otherwise the vegetation of the island is low and sparse and benign. A few low pines, bayberry, beach plum, cranberry, blueberry, and much more poison ivy. The wetlands feature Salt Hay and the taller Spartina alterniflora, and Phragmites, among others. Bare sand dunes are prominent in places. No closed forest anywhere. No tall trees anywhere. A number of lakes and ponds dot the island. These are frequented by a variety of ducks, but mainly American Black Ducks and Mallards. 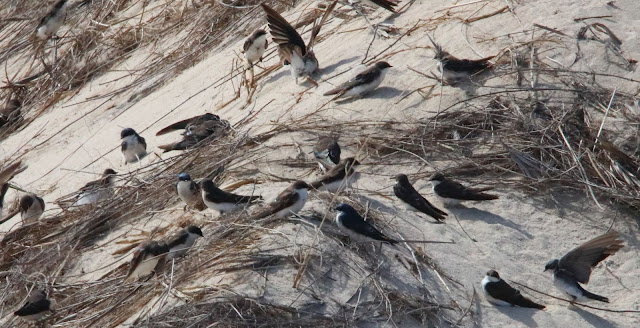 Tree Swallows enjoying the sunshine on an afternoon in the dunes

The island is a federal wilderness area, and no camping is allowed. I had a special use permit (#53514-19-11), which allowed me to stay on the island to survey shorebirds. That said, it is perfectly OK for day visitors to visit the island and hike here and there. Visitors mainly are fisherfolk and beach-lovers. I am told the surf-casting from the Atlantic shore is excellent for stripers and bluefish.
There are beaches on both the Sound (bay) side and Atlantic side. But it is the Atlantic strip of beach that is mind-blowing—backed by high dunes and very broad and very white. This beach is mainly the domain of shorebirds, gulls, and seals. There are few beaches along the Eastern Seaboard that have as few human footprints as this one. 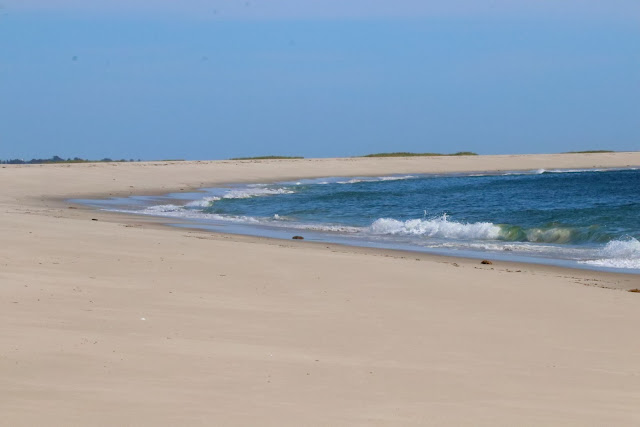 The island is reputed to host a small population of White-tailed Deer, though I saw only a single discarded rack of antlers and yet no footprints in the sand. Creatures I did encounter were Garter Snakes and toads, which I was told are Fowler’s Toads. 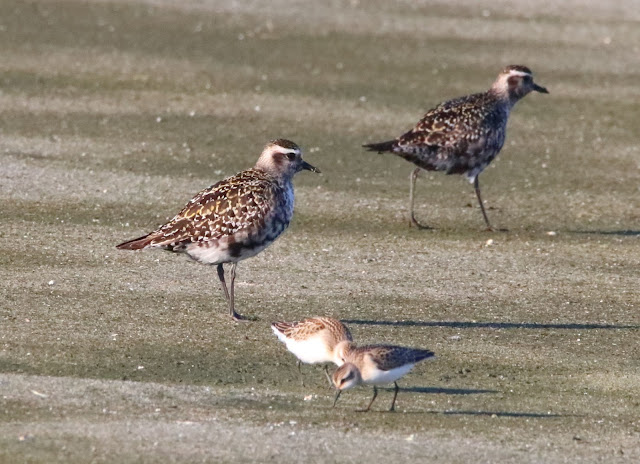 I walked north of the Sound side one morning, in search of shorebirds. This is very peaceful and pleasant and the shore was littered with the shells of dead Horseshoe Crabs. It made me wonder why so many individuals of various ages had died this summer.

Hudsonian Godwit on the wing over the Powder Hole

Walking the Atlantic is a bit more exciting—windy and very sunny because of the broad white sand beach. I saw a single blowing Humpback Whale, and also saw several waving fins of the weirdly-shaped Ocean Sunfish, that float on the surface of the water. The fin reminds one of a shark, but it is waved about willy-nilly. A shark’s dorsal fin is unable to do that. 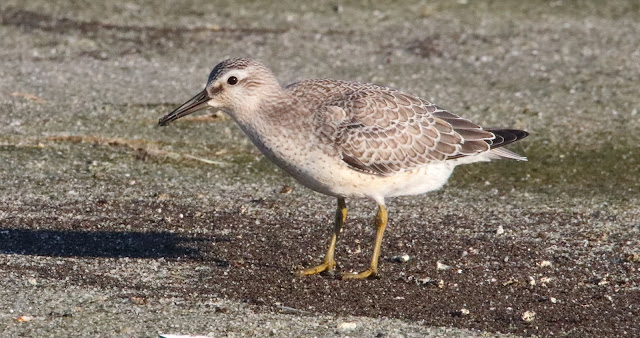 Sea ducks loafed in flocks off the shoreline. Common Eiders were around, and I also encountered all three species of scoters, Blacks being the most abundant.

Of course, Double-crested Cormorants were omnipresent.

Gray Seals are abundant around the island. The seals patrol the shoreline, often popping their heads out of the water to look at me. Groups of seals would follow along the shore as I walked the beach. They are very curious. 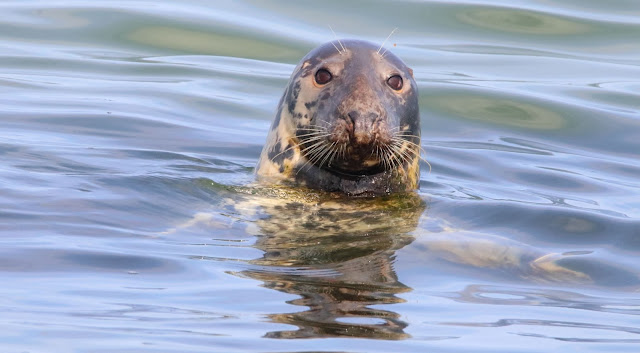 A curious Gray Seal eyeing me...

Twice I came upon large groups of 50 or more seals hauled out on the beach in the early morning. These includes big brutish males, smaller gracile females, and little ones of the year. Among these groups I saw seals with major gashes in their flanks. A product of shark attack? 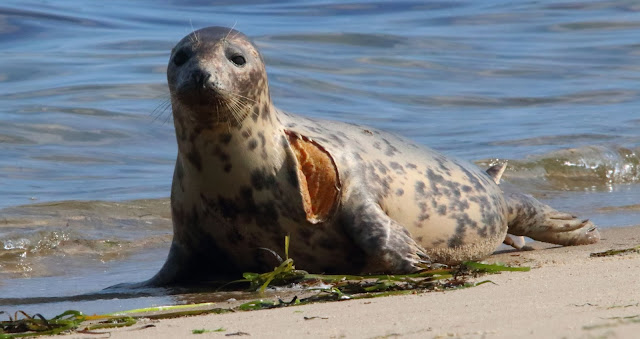 A young Gray Seal with a wound (from a shark?)

I spent more time at the Powder Hole mud flats than any place else, aside from the lighthouse where I was based. There were always shorebirds and gulls and terns at the Powder Hole, so it was always productive.

A big haul-out of Gray Seals

I hunted for Baird’s and Western Sandpipers among the flocks of Semipalmated Sandpipers. I never did find a Baird’s, though I did locate several Westerns.

I did not see evidence of a lot of songbird movement. I had a few Bobolinks overhead, but few warblers. I think it was early in the season.

Tree Swallows were starting to assemble in numbers. It was fun to watch the swarms that came together out on the beach or over the interior vegetation. Thousands! 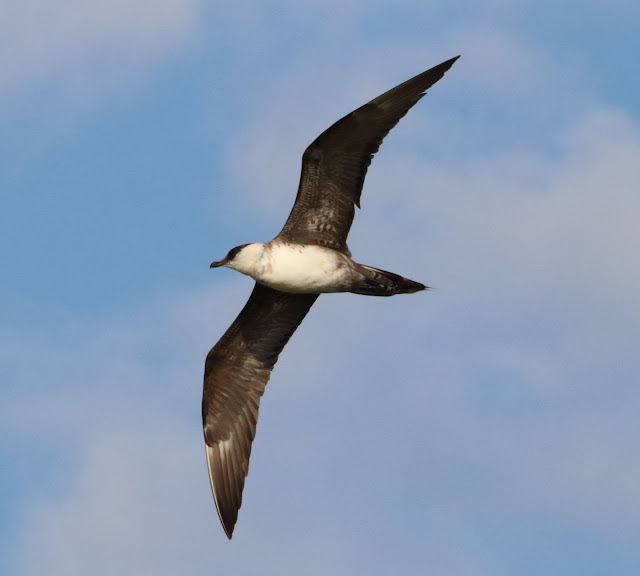 An adult Parasitic Jaeger over the Nantucket Sound's beach

One morning I was surprised to see a Parasitic Jaeger appear overhead. It circled me and then several times dive-bombed a foraging Northern Harrier. 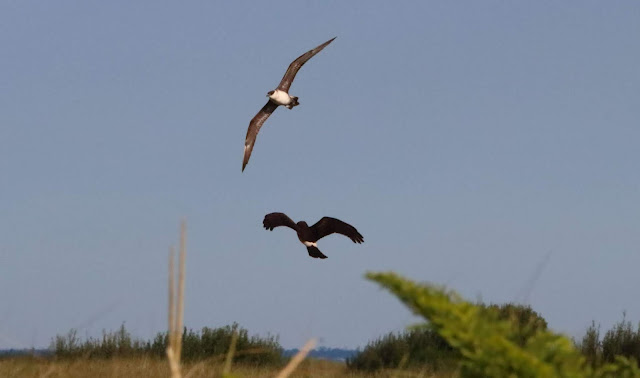 The jaeger takes off after a female Northern Harrier

South Monomoy continues to evolve, as winds, currents, and storms move sand and water in unexpected ways. The bottom of the island has grown into a large circular “bulb,” gathering sand that get’s carried south down the eastern face of the Cape.

A resting flock of Semipalmated Sandpipers

Returning back to Stage Harbor after my week on the island, I was welcomed by an abundance of birds—Common Terns, flocks of Double-crested Cormorants, and an Osprey and Red-tailed Hawk. 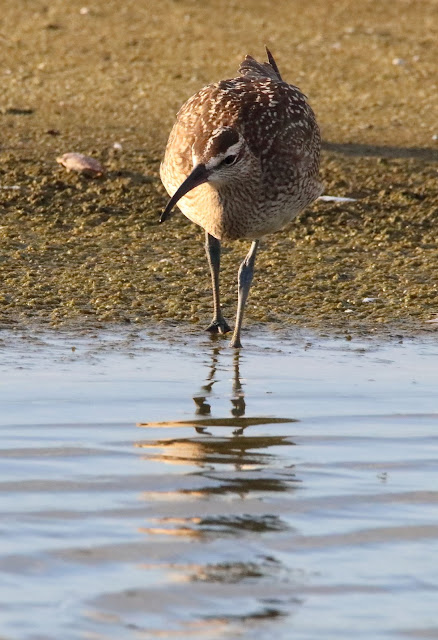 Whimbrel foraging in the Powder Hole

Before heading home to Bethesda, I had a few more things to do on the nature front—take up a Cessna 172 in search of sharks and take a whale watch out of Provincetown. Those adventures will be featured in the next (last) blog of this current trip... 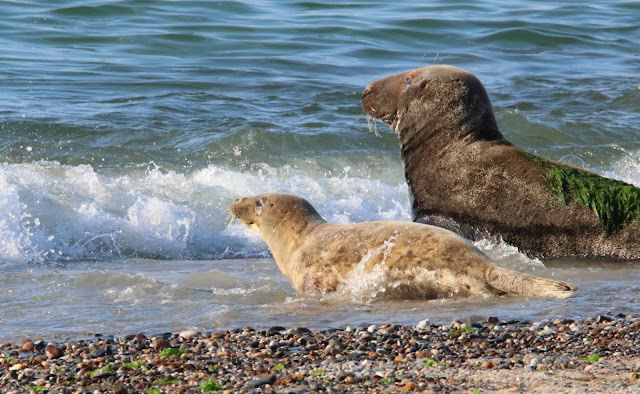 Posted by Bruce Beehler at 1:15 PM