typical morning at the Powder Hole

On the early morning of the 3rd of September, anticipating a mid-morning pick-up and return to the mainland, I headed down to the Powder Hole for one final encounter with my beloved shorebirds. On the walk down, I heard Bobolinks passing over, giving their pink notes.

Things were fairly quiet at the sandflats. No godwits, no Whimbrel. Just yellowlegs, dowitchers, Semipalmated Sandpipers and Plovers, oystercatchers, Stilt Sandpipers, Willets, Black-bellied Plovers, and gulls and terns. Nothing had coming in overnight, but a few things had departed for parts south.

Back at the Lighthouse, I packed up, cleaned and straightened the house, and started freighting my stuff out to the landing on the Nantucket Sound. I used a wagon with balloon tires to move the heavier and bulkier stuff across the Poison Ivy-laced landscape.

Then I heard from my Fish & Wildlife Service hosts that because of the approaching threat of Hurricane Dorian, that plans were changing and my return to the mainland would be delayed.
The Service needed to batten down the lighthouse facilities and they also decided to keep the bird banders off the island until after the passing of Dorian. 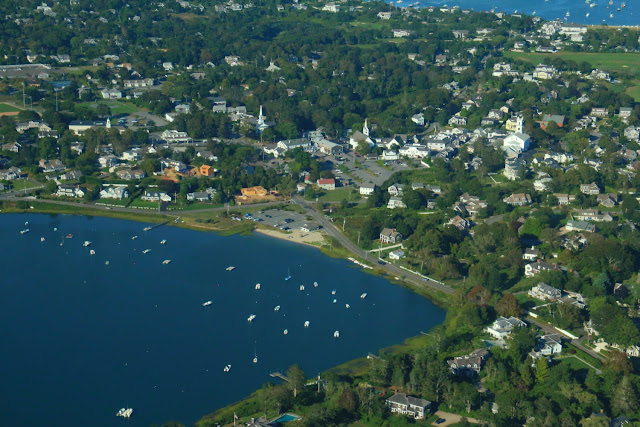 By 1 PM I was back in Stage Harbor (as mentioned in the preceding blog), which was filled with birds.

From the FWS HQ, I Ubered to the repair shop in Harwich, where the smashed back window of my car had been repaired (In the pre-dawn hours, when departing my campsite in Provincetown a week earlier, I had backed into a jutting treelimb that popped the back window—not a convenient thing to happen on the morning of my departure for South Monomoy!).

My plan to do a whale watch this afternoon was stymied by these bureaucratic delays, so I reverted to a fall-back plan—chartering a Cessna to search for Great White Sharks out of Chatham airport. 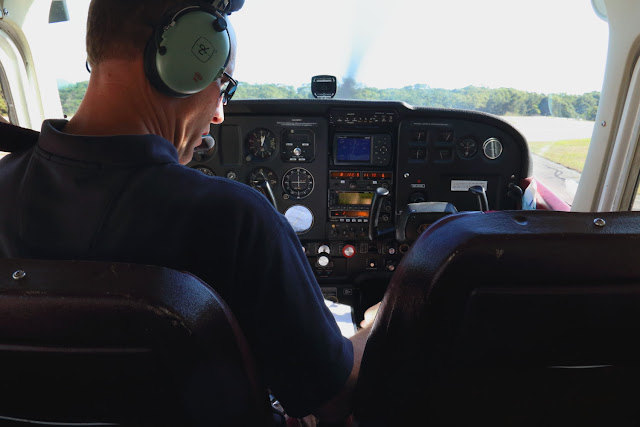 Pilot Tim Howard, in his Cessna 172

At 4 PM I boarded the Cessna 172 with Tim Howard at the rudder. The two of us took off without delay and within 3 minutes we were tracking northward on the Atlantic side of South Beach, with beautiful Chatham to the southwest of us. And there down below in the pale green water was the dark form of a Great White.

Yep, a Great White right at the surface, cruising for seal burger

We banked hard to allow me to photograph the beast, which was less than 100 yards off the shore, in shallow water with a white-sand sea bottom, making it particularly easy to see the dark dorsal surface of the shark. 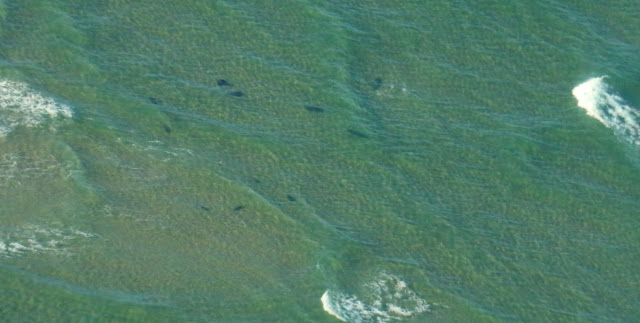 shark bait--Gray Seals foraging in the shallows northeast of Chatham

But there was more. During our 40 minute flight, we also picked out 7 Ocean Sunfish floating flat on the surface of the sea, waggling a fin in their peculiar fashion. 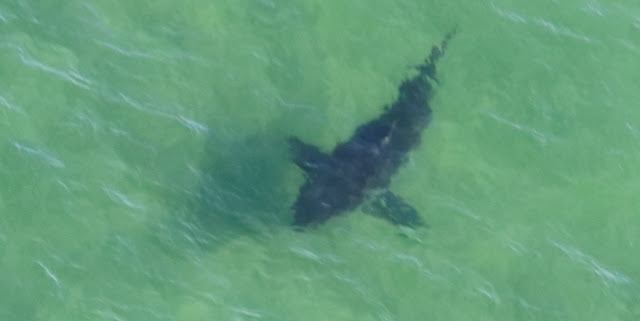 We were looking mainly for sharks, and we found three different individuals in the flight, which took us almost to Truro. I had long wanted to see a Great White, and this did the trick!

Tim told me that finding Great Whites from the air is pretty easy during this time of the year, so long as the wind is down and the water relatively clear. The best time of all is the early morning when the sea surface is glassy and the sun is in the east.

Note how long the pectoral fin is in this creature

After departing the airfield, I headed to Provincetown for the final night of my 6-week field trip. I dined that night at the Canteen in bustling downtown P’town with whale naturalist Dennis Minsky, who organized a morning whale watch for me the next morning. 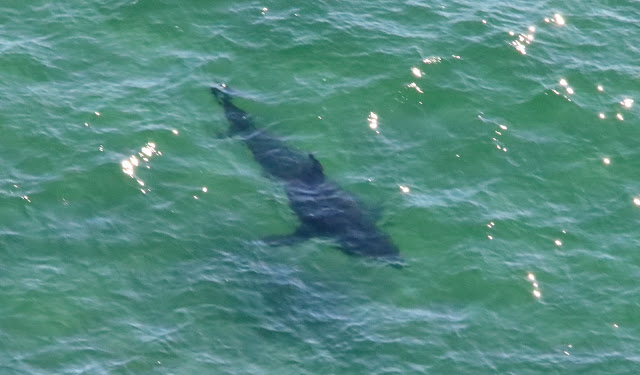 The dorsal fin  is almost out of the water

Early Wednesday morning I packed the car and headed out to Race Point Beach to see what was happening out over the water. Not much. I glimpsed one or two blows from Humpbacks, but no big collections of birds. I did glimpse a single jaeger swooping about out in search of a tern or gull to harass. 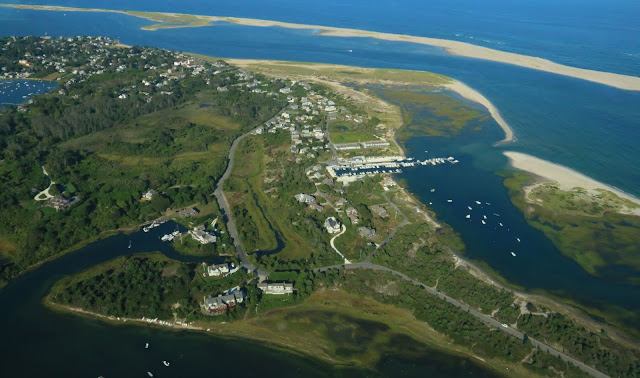 Above Chatham. A view of South Beach in the very back (sand barrier), and Chatham's "deep south" 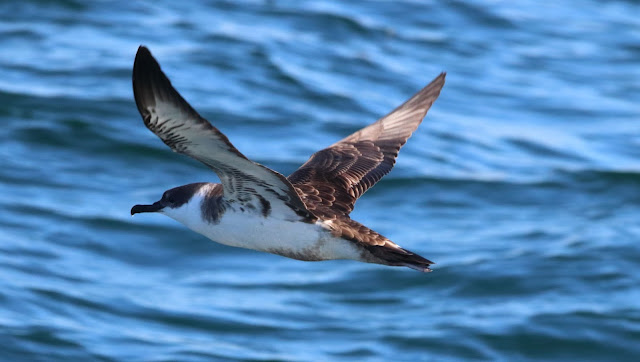 This morning, the seabirds were few: 15 Great Shearwaters, 1 Sooty Shearwater, 1 Leach’s Storm-Petrel, 5 Red-necked Phalaropes, 5 Northern Gannets, and that’s about it.  Most of the Great Shearwaters we saw right in the mouth of the harbor. The open ocean was fairly bird-free.

The boat passed several Ocean Sunfish, each one waving a sharklike fin above the surface. 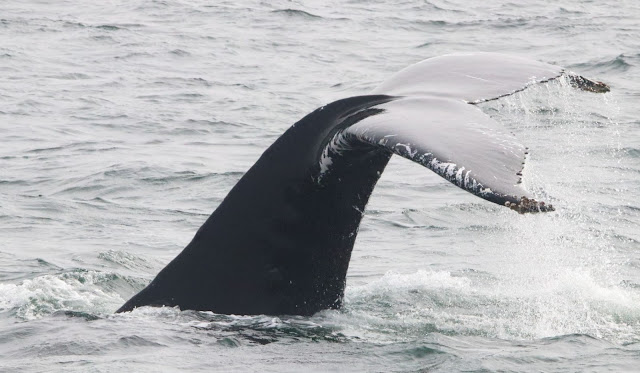 Our whale encounters were all of the Humpback variety. We spent quality time with two mother-and-calf pairs. The calves were all grown up, but still associating with their mothers.

One mother did a partial breach with a tail smash into the water, raising quite a splash. 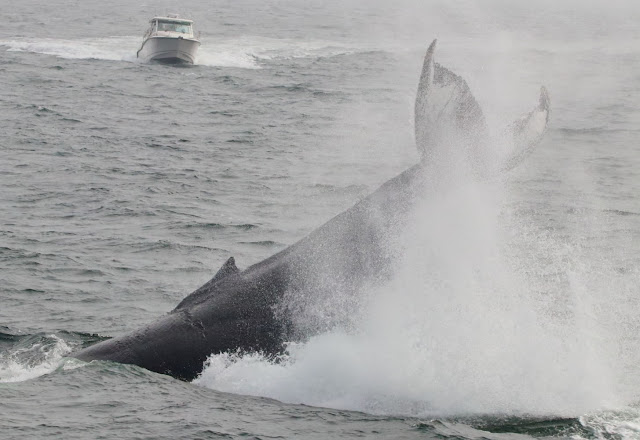 The boat moved from sun to cloud to heavy fog and back, making for changing sea conditions.

the "blow" - how one finds whales at a distance...

Back in the harbor, I started up my car and began my trip home. 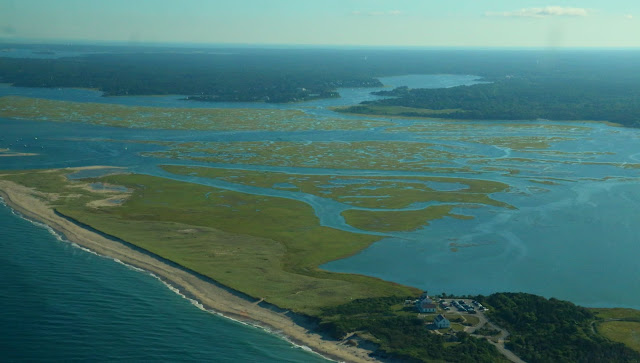 Posted by Bruce Beehler at 9:25 AM