About 10 miles north of Carlisle, Pennsylvania, Kittatinny Ridge dominates the skyline. It carries the Appalachian Trail southwestward along its rocky heights. Where Route 74 crosses a low point on the ridge, there is a rocky overlook ideal for watching migrating raptors in autumn. This is Waggoner’s Gap Hawkwatch. In early November, when the winds are from the northwest or the south, Golden Eagles and other raptors can be censused when they pass by the rocky ridgetop. A chance to see these birds lures hawk watchers from far and wide.

To choose a time to visit, I studied the hawkwatch data from past years in hawkcount.org and I also monitored the 10-day forecast from weather.com, looking for the best two-day combination of winds. Happily, the 3rd and 4th of November were the best dates. I was pleased because this would get me away from the TV during the horrors of the national election (something we are  still suffering through). I drove up to Carlisle the afternoon of the 2nd, and I had a full 48 hours free of NPR or CNN and its breaking news. Carlisle itself was very quiet because the covid lockdown has shuttered Dickinson College, the main industry within this small town. 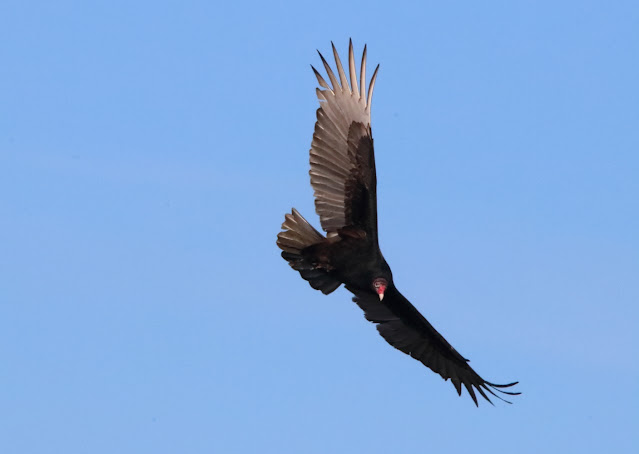 Tuesday morning predawn I made my way to the Carlisle Diner for a hearty pre-hawkwatch breakfast, then drove up the country road to the top of the high ridge, with its rough mane of golden and red-brown oak foliage. I parked in the wooded parking lot provided by Pennsylvania Audubon, owners of the site. A ten-minute walk up the tumbled rocky scree brought me to the overlook, already populated by ten or so watchers—mainly regulars. 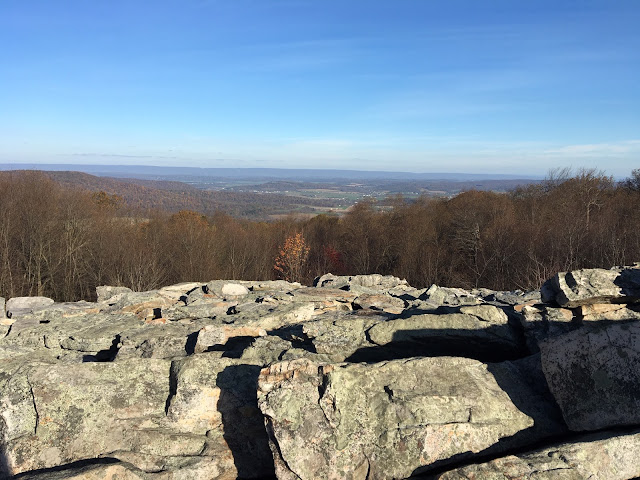 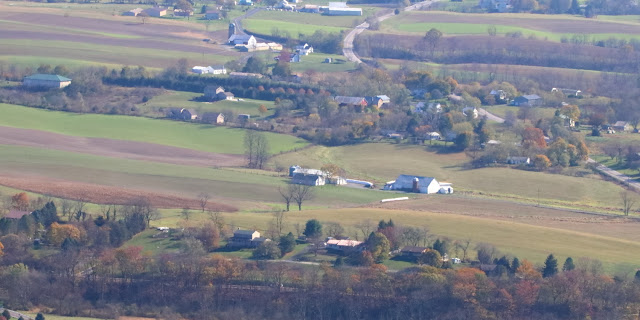 
Autumn hawkwatching is primarily a pastime of retirees, because it is a seven-days-a-week operation, with very long hours. The count typically goes from sunrise to sunset. Working folks stop in for a short bout of hawk watching early or late, but it is those with the time available that are here throughout the long days (people just like me). 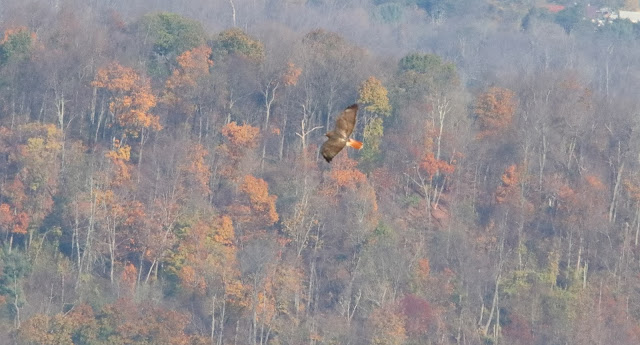 
When visiting Waggoner’s Gap Hawkwatch, it pays to be prepared. A close examination, in advance, of the hourly forecast is important, in order to have proper clothing for chilly dawns and often very windy afternoons. Wind chill is big atop the ridge. Stout boots, layers of clothing, sunscreen, hats and woolen caps, and sunglasses are all warranted. Also hot and cold drinks, lots of snackfood, and something soft to sit on (the rocks are rough). This all makes the experience not unpleasant.

What makes it pleasant is the combination of the passing birds and the lively chatter by the scattered company of watchers. Everybody is scanning the skies in search of a tiny dark speck that will slowly grow in size as the distant raptor approaches the group. 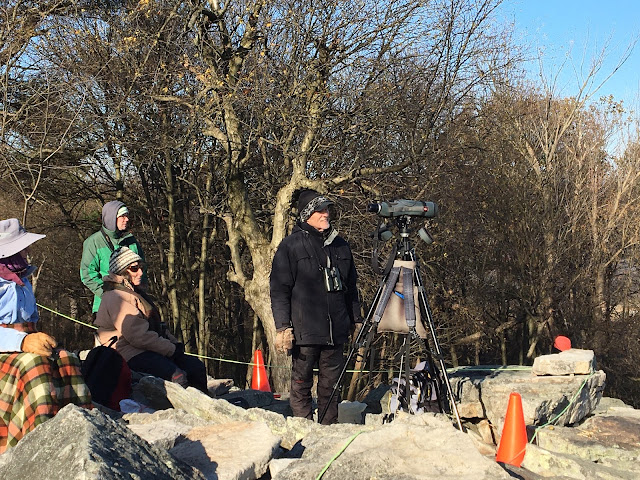 Hawk counters dressed for the cold

It’s not only raptors. My two days on the ridge this year produced flocks of American Pipits, Red Crossbills, Evening Grosbeaks, Purple Finches, Pine Siskins, American Goldfinches, American Crows, Common Ravens, and more. In addition, a bird feeder at the site lures in the locals—two species of chickadee, two species of nuthatch, and Dark-eyed Juncos. 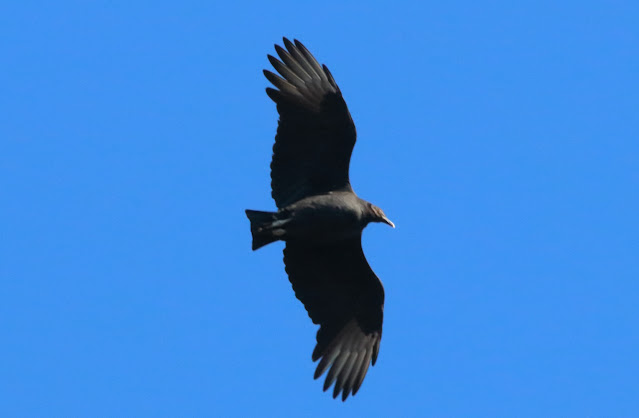 There are also goodly numbers of Black Vultures and Turkey Vultures, sometimes in flocks. These move back and forth up and down the ridge and over out in the valley, and keep you busy. A dark bird in the distance could be a Turkey Vulture.... or could be a Golden Eagle. Every bird must be checked out... 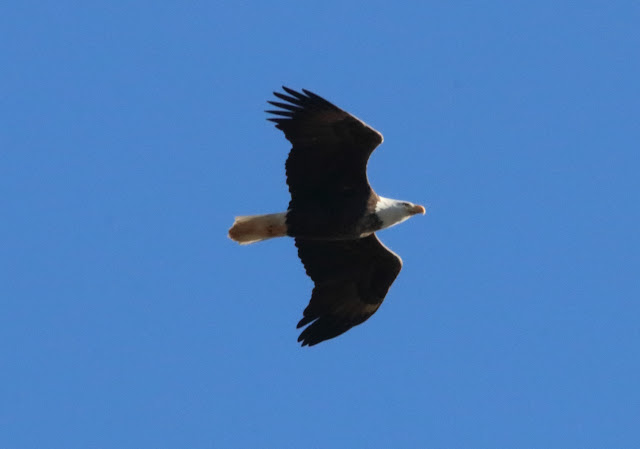 Sitting in this group, folks are continually calling out a sighted bird and its location (“above the bowl” .... “just right of the Little Dip” ... or “Over the Top!”...) so that others in the group can zero in on the bird.

Most people present in early November are thinking mainly about one species—Golden Eagle. Waggoner’s Gap typically gets from 150-250 Golden Eagles each year, mainly between late October and late November. This is a species of raptor difficult to see in the East except from a few hawk watches in the Appalachians. Waggoner’s Gap is perhaps the most famous place in the East to see these great dark eagles. 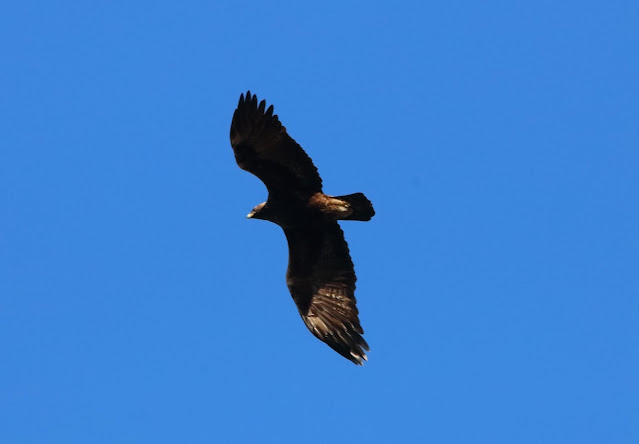 I picked two good days for Goldens. Day One produced 30 individuals, and Day Two produced 13 birds. Each one is savored. An individual can be in view for as much as 5 minutes, in situations where the bird is first picked out in the far distance across the valley to the north. One can then watch the bird slowly make its way westward and southward, often seen as a large dark bird as much as a mile off (best followed with a spotting scope). The counters spend a lot of time examining each bird, to determine its age by its plumage (white in wings and tail indicates a juvenile, tawny on the upper surface of the wings indicates an adult).


Funny thing, in most places in the US, a Bald Eagle is a special bird to see. Not so much at a place like Waggoner’s Gap, where Bald Eagles are “ho hum” and Goldens are the birds much more in demand. We had 15 Balds on the two days I was there... 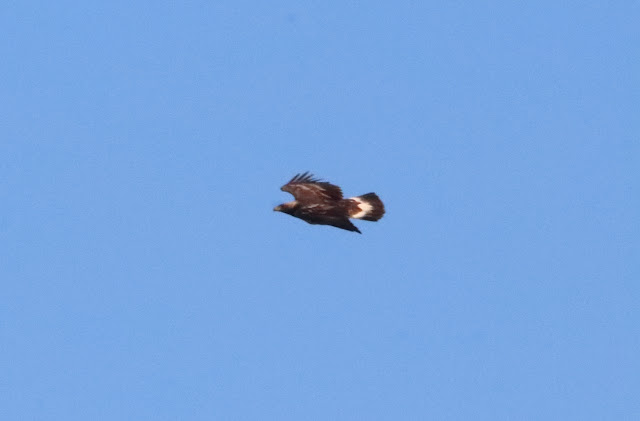 
That said, a close encounter with a full adult Bald Eagle coming across the ridge is a worthy experience. We had one of these the early morning of the 4th and the camera’s were clicking noisily...

Early November also brings a chance of seeing another rare bird—the Northern Goshawk. We had a single young bird on the 3rd and none on the 4th. This rare species is something of a will-o-the-wisp. It passes by rapidly and observers shake their head and say “did I just see what I think I saw?” Most of the passing goshawks are young and look a lot like an oversized young Cooper’s Hawk. Our single bird was identified that day as a “large Accipiter.” It was only after Jesse Adkins shared his nice image of the bird the next day did the species make it onto our count for the 3rd.  The hawkwatch only gets a handful of goshawks a year, so every one is special.

The biggest surprise of the two-day visit was the single Rough-legged Hawk that came over high up on the afternoon of Day Two. This handsomely-patterned species is even rarer than the goshawk at Waggoner’s Gap. This northern tundra-breeder winters in open prairies as well as coastal marshlands and is very rare in migration along the Appalachian ridges. 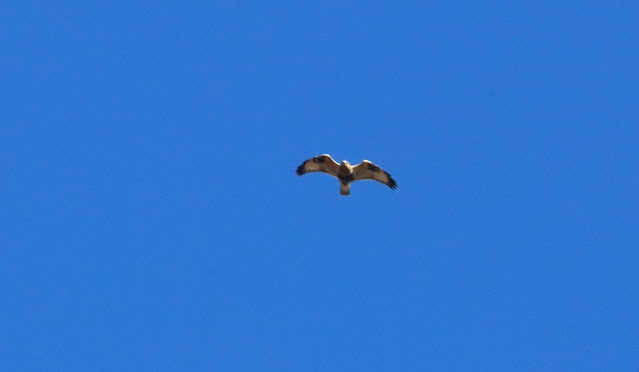 I want to thank the official site counters Dave Grove, Ron Freed, Charlotte Catalano, and Gene Wagner for their hospitality. It is an educational and sociable experience spending time on the high rocks with these folks. I always learn a lot. 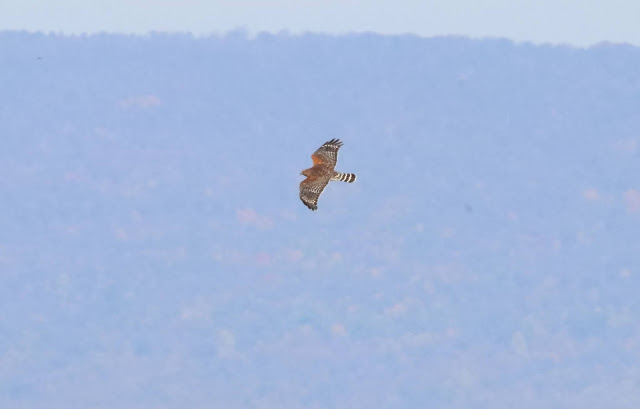 
One Golden Eagle appeared to have a white radio trasmitter attached to its back (see photo below). This is a bird we can follow to its wintering abode if we can track down the scientist following this bird.

Adult Golden Eagle with white radio transmitter on upper back

Seeing more than 40 Golden Eagles in a two-day stretch is an experience I do not expect to replicate in future years. 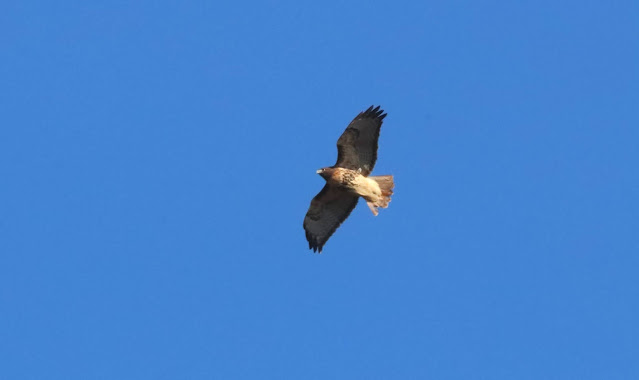