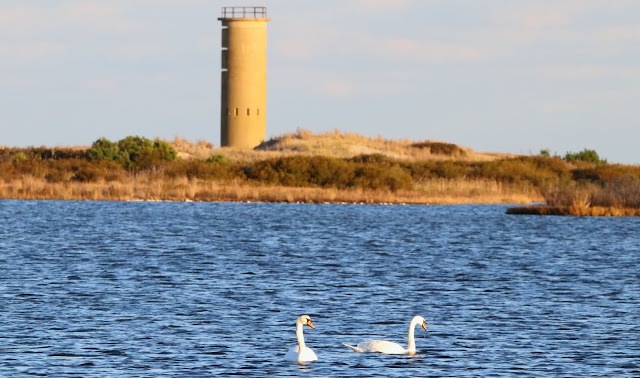 As November turns to December, it is time to pack the car and head to the western shore of Delaware Bay in search of Snow Geese and other winter specialties. I watched the weather, waiting for a rain-free and not-too-cold three-day stretch, and found that 2-4 December fit the bill (also being mid-week, meaning quiet landscapes and fewer people afoot). This was the ideal time to test out a new zoom lens and fresh camera body, as well as a novel spotting scope. 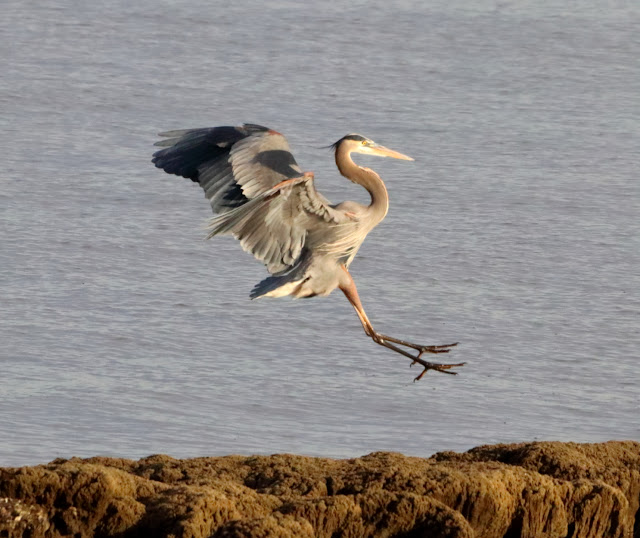 One of the joys of early winter Delaware birding is the lovely peaceful solitude while walking or biking in the abundant open spaces of the Delaware shore. Many sites are blessedly empty, leaving nature to dominate.

I planned two nights based out of Lewes, Delaware, which is ideally positioned for visiting an array of natural places. The Hotel Rodney, in downtown Lewes, also is central to all the fun dining localities in town. Lewes in early December is festively decorated with an abundance of seasonal lights, and the storefronts are bright with special Christmas displays. The drive to the shore is a bit over two hours. I broke my drive with a stop for a hearty birder’s breakfast at the Southern Grille in Ellendale. This would power me through a long day in the field without a stop for lunch. 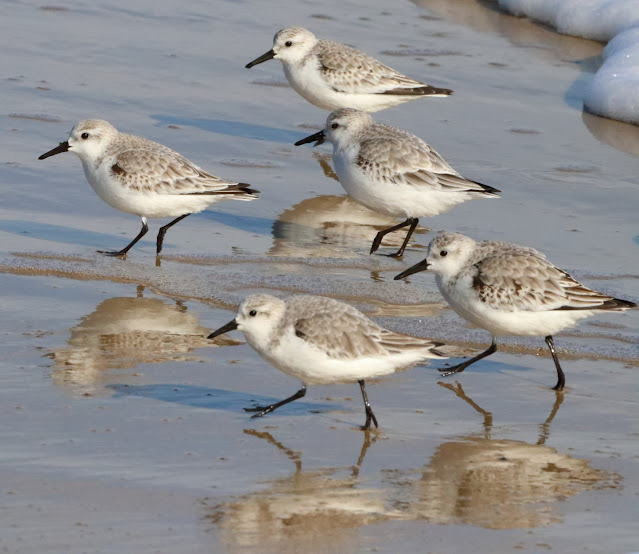 My first birding stop was Prime Hook National Wildlife Refuge. This is about 20 miles north of Lewes. Among Delaware coastal birding hotspots, Prime Hook is overshadowed by the more famous Bombay Hook NWR. But it definitely has its charms. I visited Broadkill Beach and Prime Hook Beach, but spent most of the day in and around Fowler’s Beach, walking the shore. I focused on three bird species in particular. 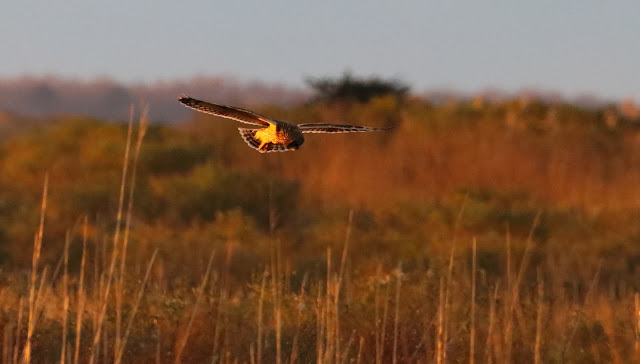 Because it was gloomy and cool, the Short-eared Owls were still active when I arrived at the beach. This lovely crepuscular owl is the main reason birders visit Fowler’s Beach. These daylight owls when in flight have the look of a large moth, fluttering over the marsh with distinctive cadenced wingbeats. Bird photographers show up every evening in hopes of a close-approach of this photogenic species. 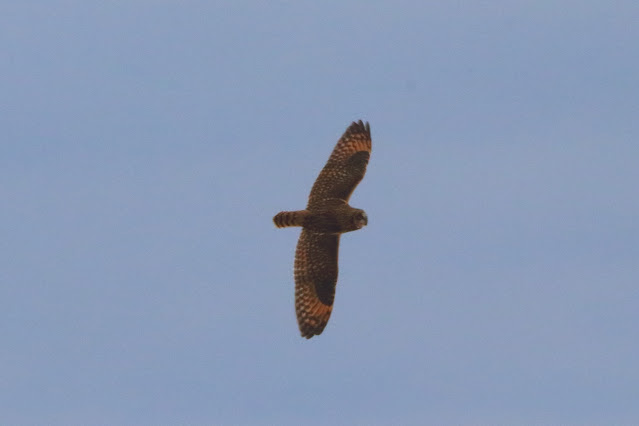 What I found was the a pair of Short-ears apparently was roosting in the dune grass along a fence line at the back of the beach, where it gave onto the interior marshland. This was also good sparrow habitat, so I ended up flushing the owls 3-4 times during my peregrinations. 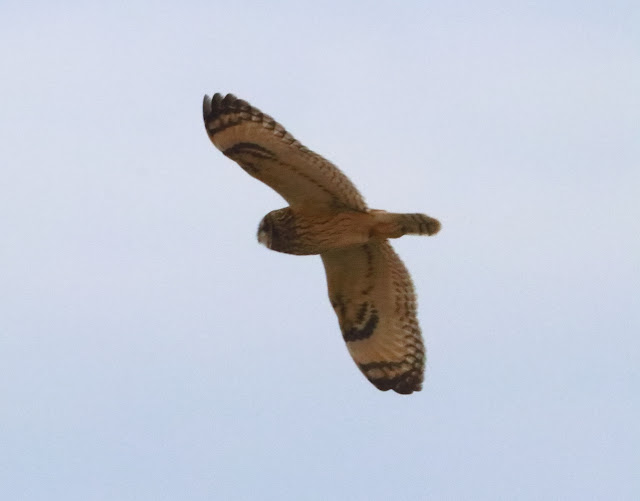 The challenge was, with these silent birds, reacting quickly enough to get a photograph before the startled bird shot away, zigging and zagging. 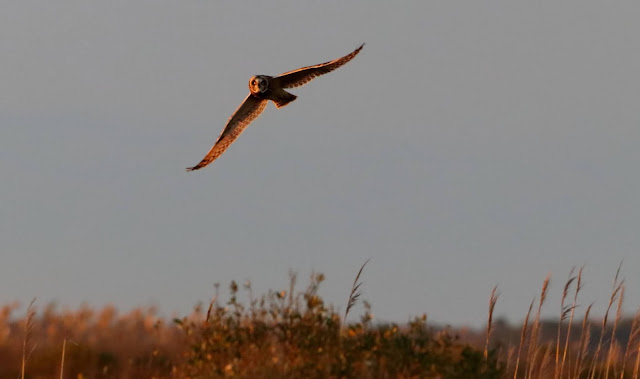 I was able to get some evocative images, though no close-up, sharp-edged, killer shots. 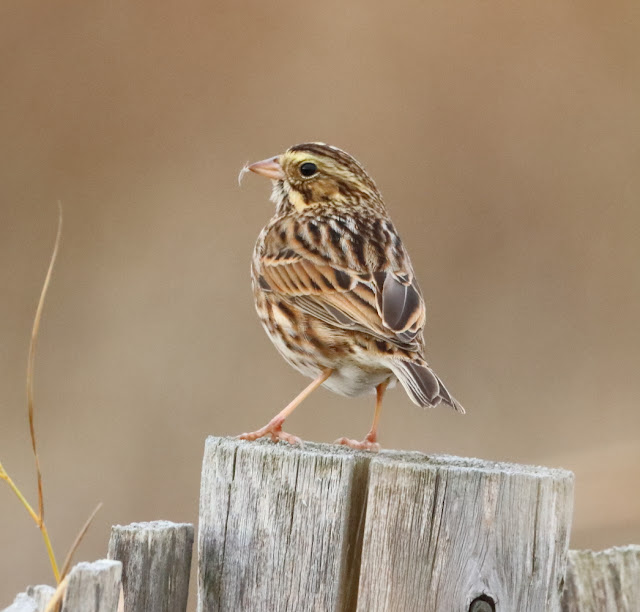 Savannah Sparrow of one of the common dark-plumaged subspecies

The beachline is prime habitat for wintering Savannah Sparrows. Most are dark individuals, one of several subspecies that winter in the East. 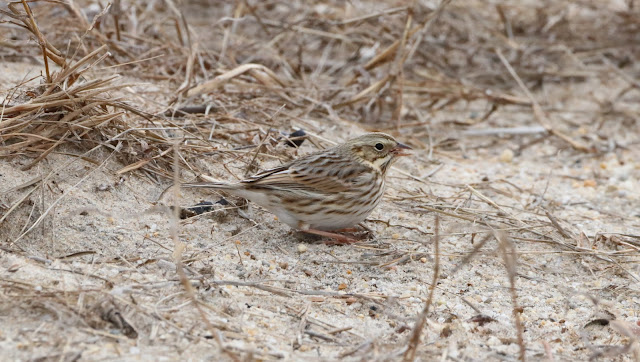 Then there is the very pale and large race, known as the Ipswich Sparrow, which nests only on Sable Island, off Nova Scotia. It winters in coastal dune dunes along the Atlantic shore.

Ipswich Sparrow-large and pale and beach-loving in winter


Fowler’s Beach is a good spot to see the Ipswich Sparrow sharing the dune grass with the smaller and darker birds. The differences are considerable.

Three Snow Buntings hiding behind the shell of a Horseshoe Crab


The broad sandy shoreline includes a bare inner “plain” that lies between the beach dune next to the water and the fenced sandy rise that gives on to the marshlands. This inner plain is flat and barren and beloved by Horned Larks and Snow Buntings. The Horned Larks move about in small parties, whereas the Snow Buntings move about in a flock of 25 or so. 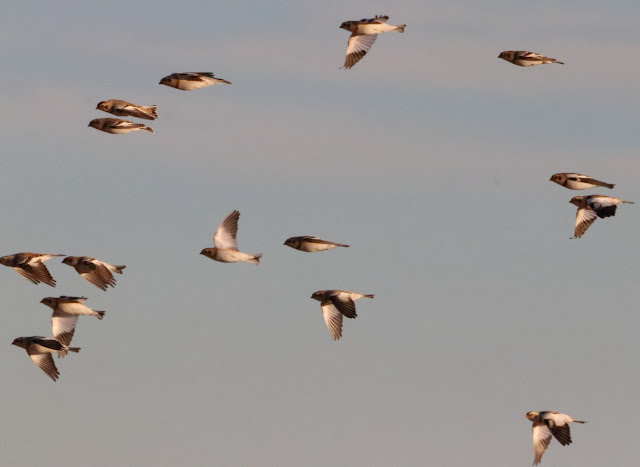 
Snow Buntings nest in the Far North and winter southward to the Mid-Atlantic states. They are generally uncommon, and are best looked for along the open shoreline of the Atlantic shore.


These flocks are nothing if not restless. They are continually exploding up off the sand and wheeling wildly about in the sky, turning this way and that...

The Snow Buntings disappear when on the ground


While on the ground, the foraging birds creep about like mice, and stay very low to the ground, nibbling at seeds. Their pied coloration—white, buff, black, actually makes them difficult to pick out while on the ground, but the white flashes in their wings stand out when in flight.

I hold the Snow Bunting in some esteem and nostalgia, because my first act as an ornithologist was getting a photograph of a flock of Snow Buntings published in the local bird journal Maryland Birdlife—I think this was in 1970, fifty years ago... 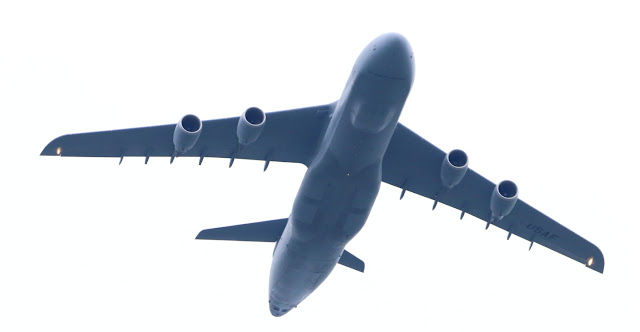 
By mid-afternoon, I had checked into my hotel, and unloaded my bike for a ride through Cape Henlopen State Park, adjacent to Lewes town. I biked the Henlopen Loop Trail to the Gordon’s Pond Trail all the way south to verge of Rehoboth Beach.


Down and back is a circuit of about 12 miles, which was a great way to end the day. I watched  the sunset over the beautiful marshlands surrounding Gordon’s Pond. 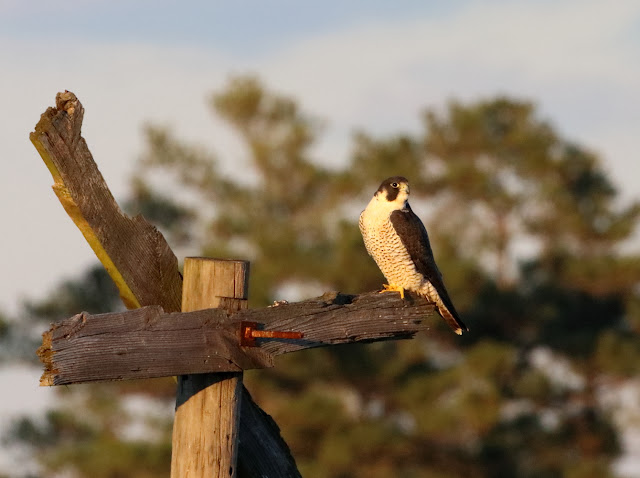 
This relatively new bike path is an excellent transect through a mix of pinelands, dunes, and marsh. It was relatively quiet birdwise, but I had encounters with Cooper’s Hawk and—surprise—a stunning adult Peregrine Falcon.

After a long hot shower, I had an early (but superb) dinner of mushroom soup and seared sea scallops at Heirloom Restaurant, a perfect way to end a long day of walking, birding, and biking.

The next day I was up before dawn and on my bike again. I did the Gordon’s Pond Trail again and watched the sun rise over the marshlands. Jumbled skeins of Snow Geese passed overhead, heading out to their feeding sites. A Northern Harrier worked the marsh grass. 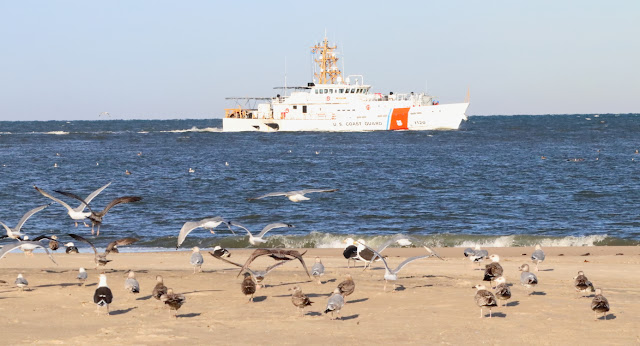 I then biked north to the Henlopen Point parking lot. From here I walked the Atlantic beach to the Point, and then back along the bayside, watching foraging Red-throated Loons, and flushing clots of loafing gulls—Great Black-backs and Herrings mostly, with the occasional Lesser Black-backed. 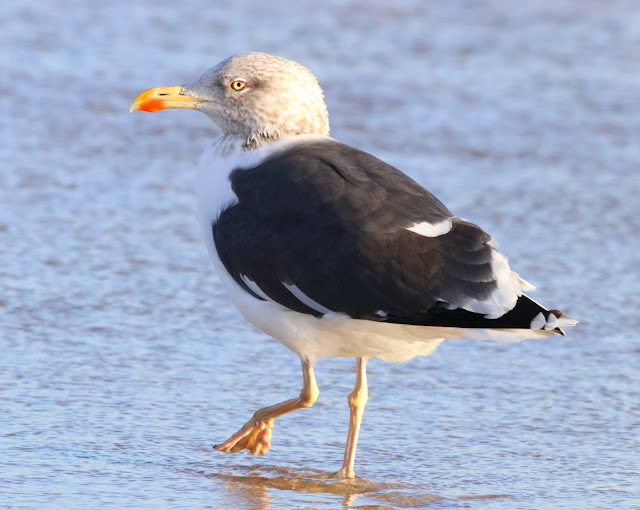 
After biking back to Lewes town I had a delicious hot breakfast at an outside table at Eggscellent (the name unfortunate, the breakfast excellent), then hopped in the car and drove south to Indian River Inlet. This break in the Atlantic barrier shore is, like Ocean City Inlet, a great spot for winter waterbirds, and today was no exception. I worked both the south side of the inlet as well as the north side. 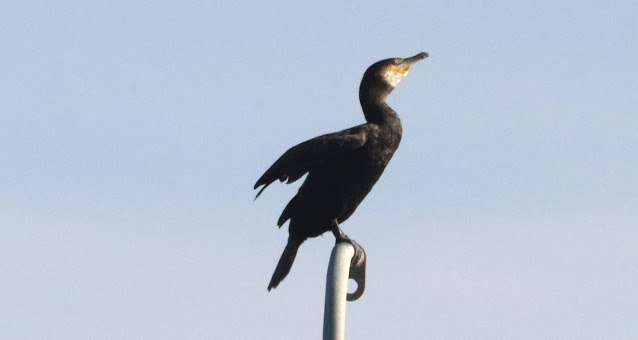 
A Great Cormorant perched atop a light pole on the south jetty.

Common Loon in winter plumage, working over a flatfish


A Common Loon worked over a small flounder in the shorebreak on the north side. 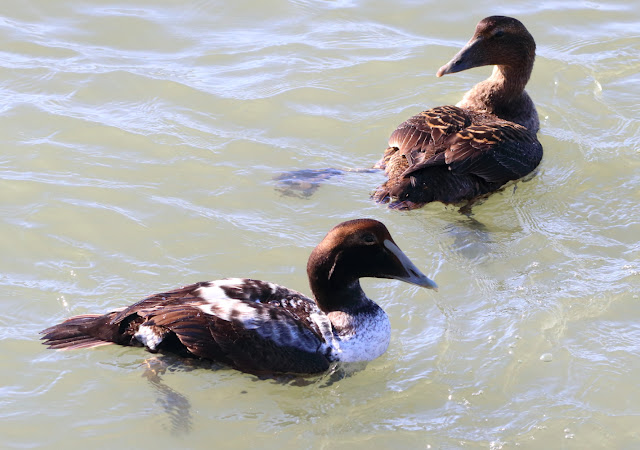 
And a group of Common Eiders foraged for shellfish on the rocks of the seawall right under the tall high-tech bridge that carries the highway over the inlet. 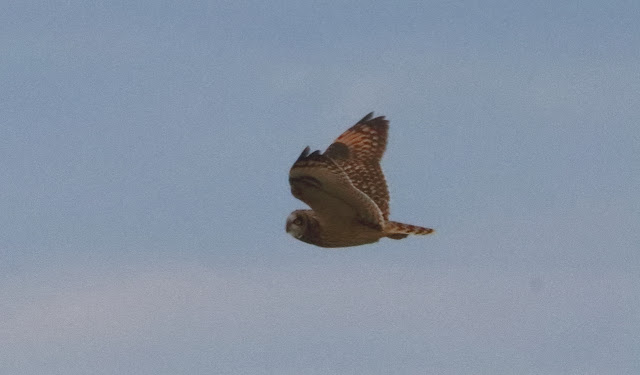 Short-eared Owl at Fowler's Beach at the day's end


From the Inlet I drove north to spend the afternoon and early evening back at Prime Hook National Wildlife Refuge. I lingered about Fowler’s Beach, waiting for sunset and the Short-eared Owls. As the sunlight began to fail, the owls appeared and began to course over the marshes, occasionally crossing paths with a Northern Harrier.

At one point I saw four owls and a single harrier all come together in the gloaming, and one of the owls sent the harrier off.


Driving south after dark on Route 1, I came to a field filled with seasonal lights. I stopped to photograph them. Apparently this is part of the festival of lights that is a feature of the area—Winter Wonderfest... I finished the day feasting at Raas, a fine Indian Restaurant a short walk from my hotel.

On Friday morning I rose before dawn and packed up and headed an hour north to Leipsic, Delaware, home of Bombay Hook National Wildlife Refuge. This is a birding hotspot I have visited over the years, though it has been quite a while since I was last there... this was my last birding stop on my Delaware tour. 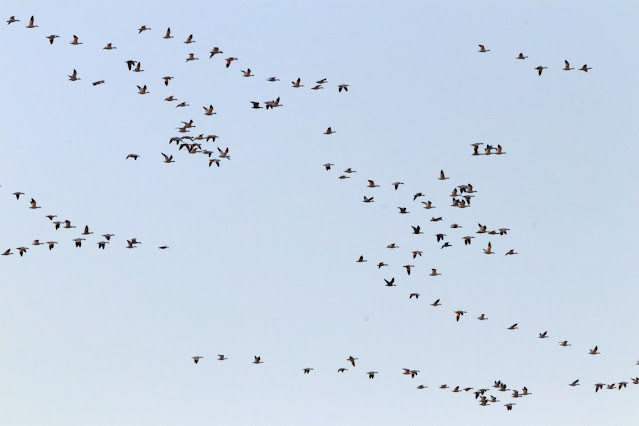 
I was hoping to find Snow Geese in numbers, which I did. On the drive up I was treated to large flocks passing high over Route 9 pre-dawn.

Then I found birds foraging in a cornfield adjacent to the Refuge. 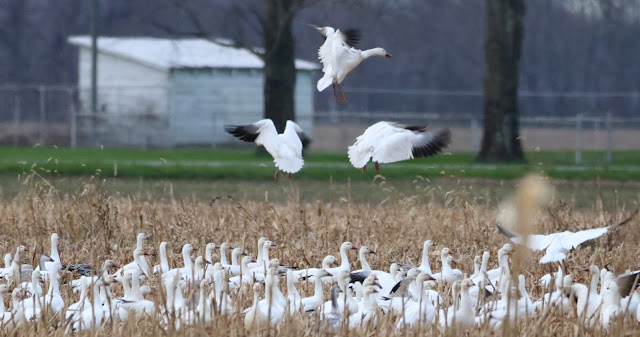 Snow Geese in the corn stubble


Bombay Hook is all about swans, ducks, geese, and shorebirds. I found flocks of Tundra Swans, Canada Geese, many duck species, Greater Yellowlegs, and even American Avocets. And of course the obligatory Bald Eagles, which take advantage of the abundant wildfowl and the hunting “by-catch”—wounded birds that are easy pickings...

The big surprise of the morning was a flock of perhaps 100,000 Common Grackles. I have never seen such a flock. They swarmed over the road, darkening the sky and filling the tall oak trees. The noise the flock produced was prodigious. What excitement! As I looked at the trees absolutely filled with birds, I wondered why? How do these birds manage to feed themselves in such a vast and unruly flock? I’ll never know. 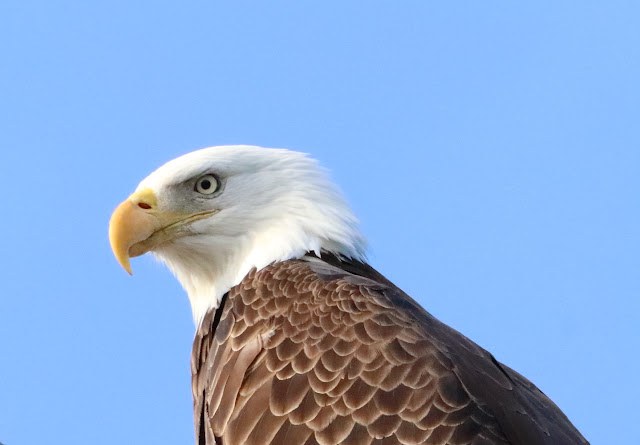 Posted by Bruce Beehler at 2:13 PM