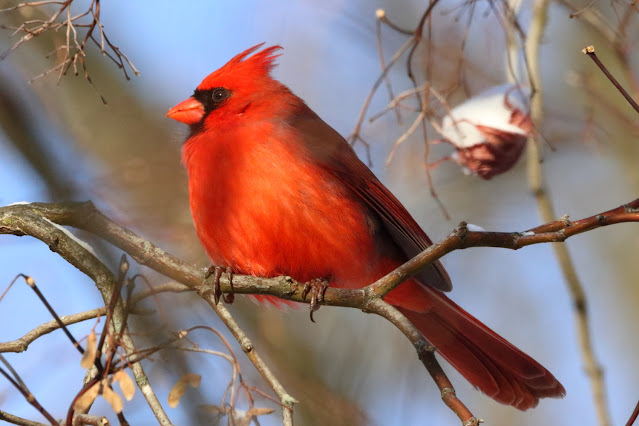 Male Northern Cardinal the morning after the storm

The DC area rarely gets big snowstorms any more. As Winter Storm Gail developed, it was evident that, once again, DC was going to miss out, and the storm’s heaviest snows would fall to the north.

vista north from the Waggoner's Gap hawkwatch, just before the snow started to fall

Wishing to experience the kinds of winter I knew in the 1960s, I headed north on the morning of the 16th, my destination Carlisle, PA. My goal was to be in place before the snow started to fall.

Look closely--is this a Black-capped, Carolina, or a hybrid chickadee? All are there atop Waggoner's Gap....

I arrived at the Carlisle Diner at 0905, ready to sit down to a hearty Pennsylvania Dutch breakfast. It was then that I found that all restaurants in PA had been closed to sit-down dining a few days earlier. I thusly did take-away and dined in my car. The venue was less than ideal, but the breakfast itself was good, as always. 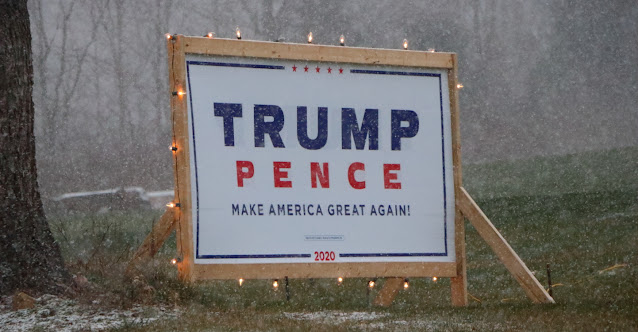 plenty of oversized Trump signs out in the countryside - this one still being lit!

From the Diner I headed north to Waggoner’s Gap hawk-watch. I wanted to see if any hardy hawk-watchers were in place. Ron Freed had reported to me that he had been in place at the Watch the day before, recording Golden and Bald Eagle singletons as well as 2 Red-tails.

As I hiked up the rocks to the overlook at around 10:15am, light snow began to fall. I found no hawk-watchers, but goodly numbers of small birds coming in to what spare seed was left from the bird feeders that are put out when the watchers are here. (They are taken in nightly, because of the depredations of the local Black Bears). 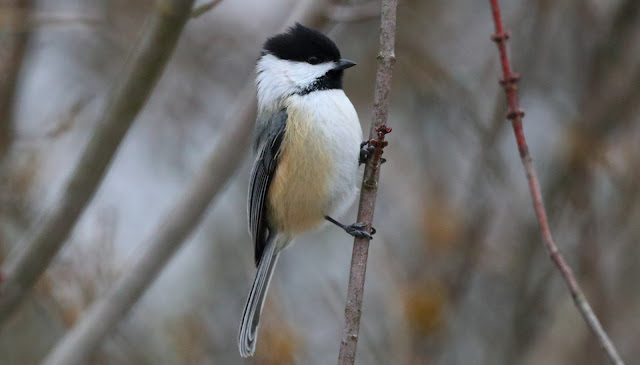 another one of those mystery chickadees... which one is this?

I spished and a half-dozen chickadees zipped in. This is a place where the local Black-caps are joined by Carolinas and hybrids. The birds I photographed could be hybrids. Let me know what you think (see 2 images). 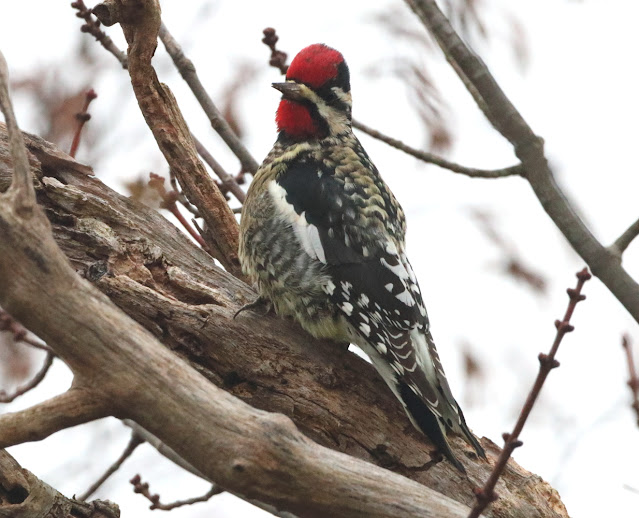 A fine male Yellow-bellied Sapsucker came in with the bird flock. 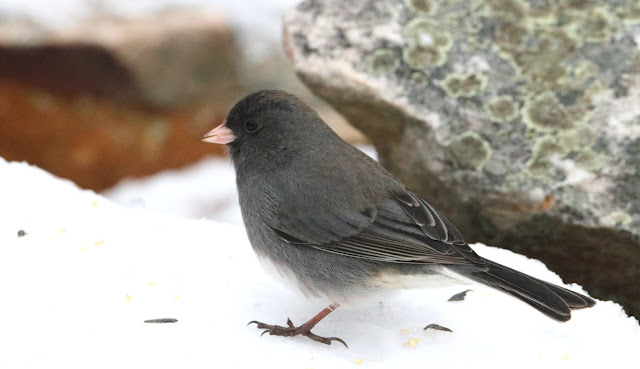 Also a group of confiding Dark-eyed Juncos searched for see among the rocks.

No raptors were evident.

I then did a road loop south, west, north, east, and then back south to Carlisle Springs, then Carlisle. I passed though a number of hamlets, including Landisburg. The snow increased in intensity as I moved about in search of birds and scenery.

Back in Carlisle Spring, I lunched on carry-out from the Fairgrounds Diner.  The snow began to accumulate. 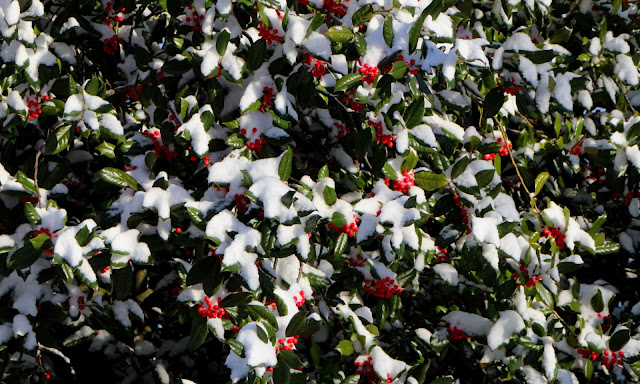 I checked into the downtown Comfort Suites Carlisle at 2:30PM. After a nap I checked the Weather Channel on the status of the developing storm (they predicted 12-18” for my location).

Once it was dark I walked a big loop of downtown, enjoying the Holiday lights and decorations, garlanded with the fresh snow. 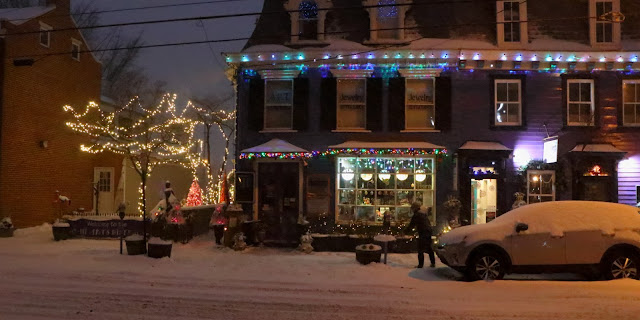 People were out walking dogs, traipsing right down the middle of the snow-strewn streets.


Downtown Carlisle is pretty as a picture this time of year. There is a lot of history here, as well as ancient Dickinson College (founded by Benjamin Rush in 1773). The town grew up around a fort constructed during the early settlement of the Cumberland valley in the 1730s and ‘40s.

Carlisle has history associated with the French and Indian War, the Revolutionary War, and the Civil War—that’s a hat trick!

After my circuit, I ordered carry-out dinner from Miseno’s II—an excellent Italian restaurant with great food emanating from a brightly-lit building on the south side of west High Street.

I hiked out through the deepening snow to pick up my meal, and lugged it back to consume at my hotel room: a sumptuous cheese-steak with a perfect garden salad in the Italian tradition. Nothin’ fancy—just tasty!

I slept in, wanting to wait out the snow, which was slated to end shortly after dawn. 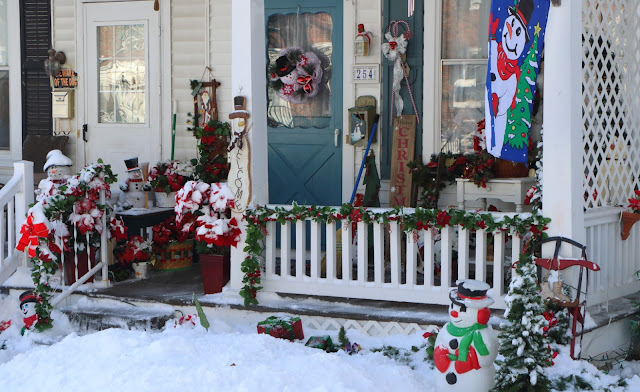 The day broke with bright blue skies and temperatures below freezing. About 10 inches of snow law on the ground. 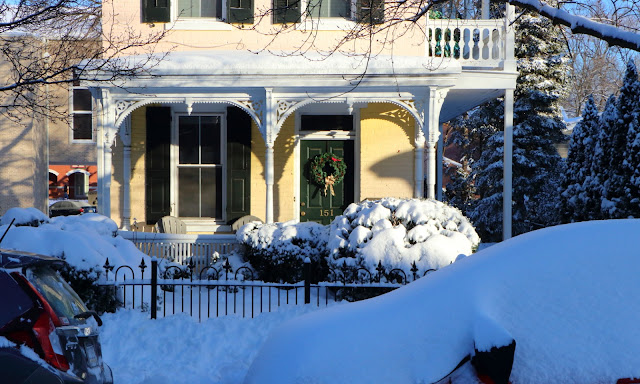 I did about 90 minutes of slogging through the snow in downtown Carlisle, looking for birds and picturesque urban snow scenes... 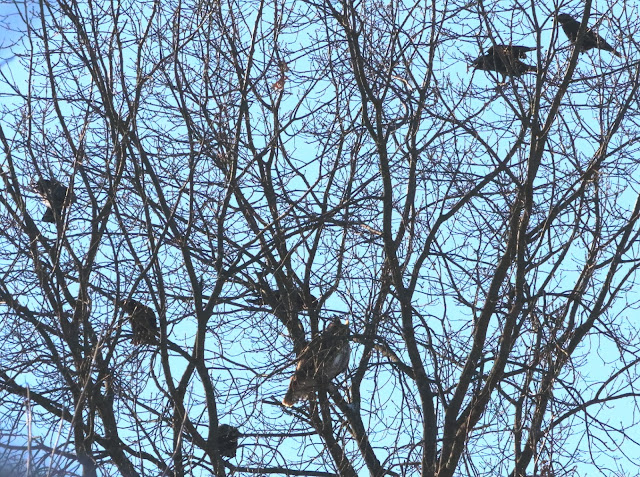 Great-horned Owl (lower center) being mobbed by American Crows in town
Everyone was out shoveling their walks and cleaning off their cars. Not many were on the road.

White-throated Sparrow at a backyard feeder in town


Back at the Hotel, I had a quick breakfast in my room, then checked out. 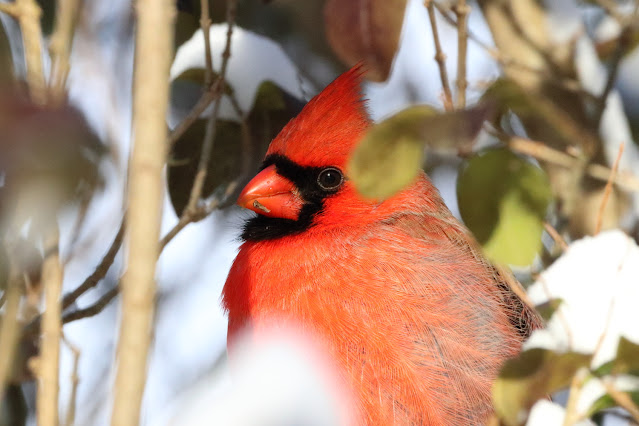 I headed back up to the Waggoner’s Gap lookout to see what was out and about.

vista from atop Waggoner's Gap


From the road at the top of the gap I glimpsed a single all-dark eagle—looked like a Golden, but I did not get decent images.

No hawk watchers on this morning... 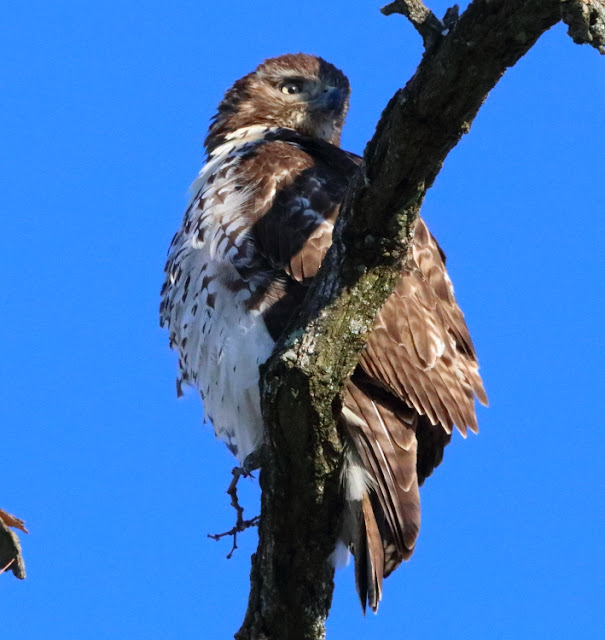 The scenery was fine, of course.

view up to the Hawk-watch atop Waggoner's Gap

Then I drove back down into the Valley and headed east on back roads...

a female American Kestrel at the roadside, north of Carlisle

Then, at noon, I pointed my car south and headed home, quite satisfied with my 2020 snowstorm. Happy Holidays to you all! 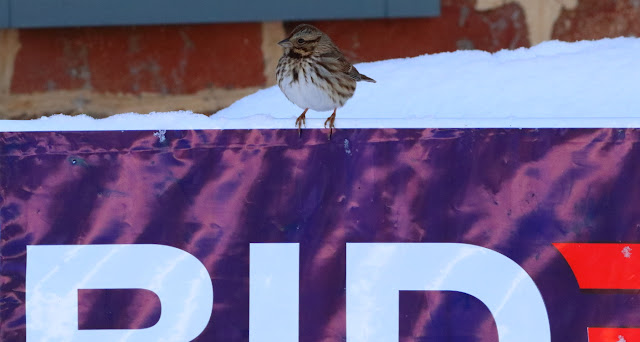 Posted by Bruce Beehler at 5:13 PM