My annual field trip in search of winter fell into place when snowy and unstable but not-too-cold weather was expected on the eastern shores of Lake Ontario in upstate New York. There would be no trip to Canada this year because of the covid-driven border closure. Based on a review of recent eBird reporting, I decided Oswego, NY, was an ideal US base for wandering about in the snowy countryside as well as checking the various shore locations for wintering waterfowl and the like. 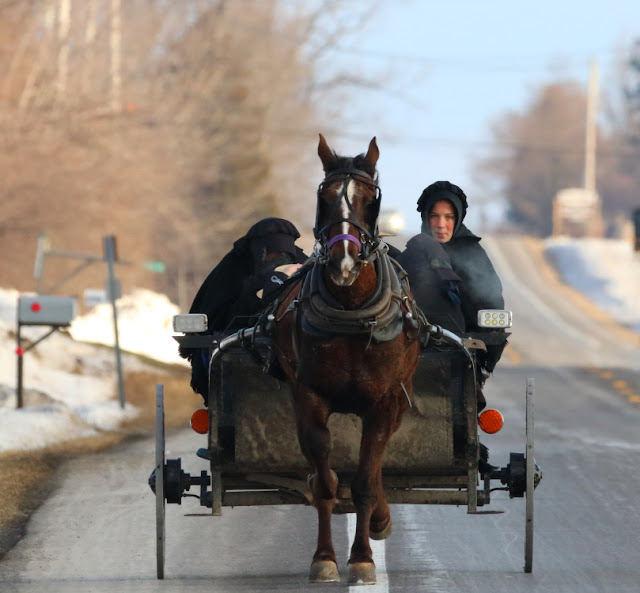 Oswego is a six hour drive north from DC according to Google Maps, but I always add 2 hours to their estimate, to allow for meals and stops for fuel, etc. This took me right through the eastern finger lakes—pretty wine country and picturesque Amish farmland. 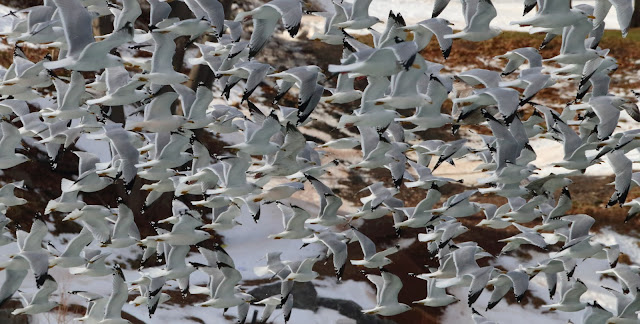 Tim Lenz from the Cornell lab reminded me of the Gyrfalcon that has been wintering at a site south of Oswego for the last several years. I loved that this great Arctic-dwelling raptor would come south each winter to the balmy climes of upstate NY! Something here must be going well for this bird to keep coming back year after year… presumably it was the sheer abundance of waterfowl in the two lakes on either side of its winter roost. 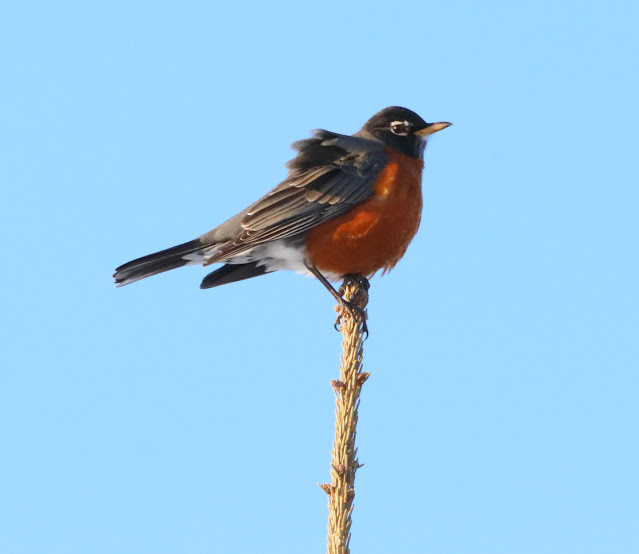 American Robin male atop of spruce, waiting for spring to arrive

I decided to stop at the Gyr site on my Sunday drive north. I arrived around 3 PM and met another birder, Phil Mills, who had driven over from Buffalo to check on the big raptor. Phil pointed out a line of trees in the back of the large industrial site. This is where the falcon commonly perched in the afternoon. A few minutes later, Phil checked the treeline once more and, indeed, there was the big falcon on the very branch it favored. 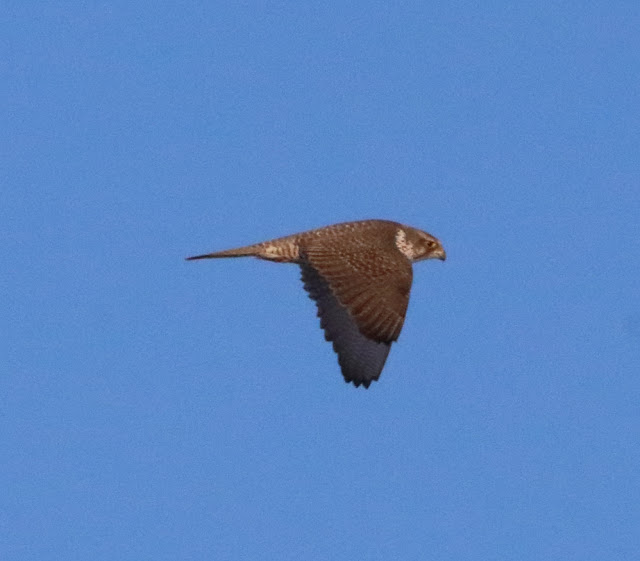 Gyrfalcon on the hunt for a duck dinner

I set the scope up and we had a nice, but distant, look at the bird perched with its back to us. Not a great look but a definitive one—a lifer for me! And I think this was the first scope-look for Phil, so he was pleased. The falcon sipped away after about fifteen minutes and the rest of the afternoon we had false alarms with passing Red-tailed Hawks. 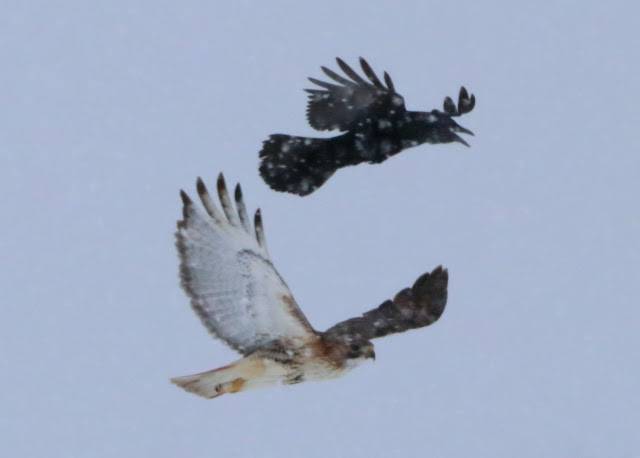 Red-tailed Hawk being escorted by a vocal American Crow

Before the day ended, I glimpsed the Gyr once more swooping through the huge snow-covered piles of rocky rubble of the work site. By the way, it was snowing at this point, and snow was to fall for the next 24 hours, providing that wintery aspect I had been hoping for, but not making it terribly easy for birding or bird photography… 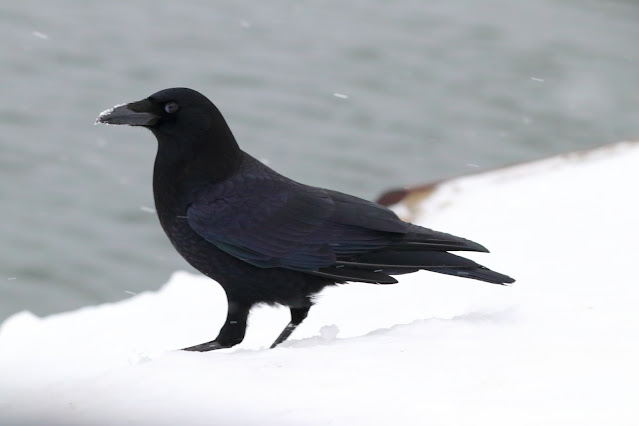 I arrived in Oswego town after dark on Sunday night, in the heavy snow. Nothing like the Great Lakes for snow production!

Three Common Mergansers--two drakes and a hen in between - in the heavy snow....

The next morning, looking out the window of my motel room, through the falling snow I could see ducks bobbing in the Oswego River—good ducks! There were mergansers, White-winged Scoters, and Long-tailed Ducks, among others, as well as cormorants. I spent the morning in and about Oswego Harbor and it was filled with waterfowl and gulls.

Monday afternoon I headed back down to the Gyrfalcon site in the blowing snow, and I passed by flocks of Horned Larks, Snow Buntings, and also Common Redpolls. 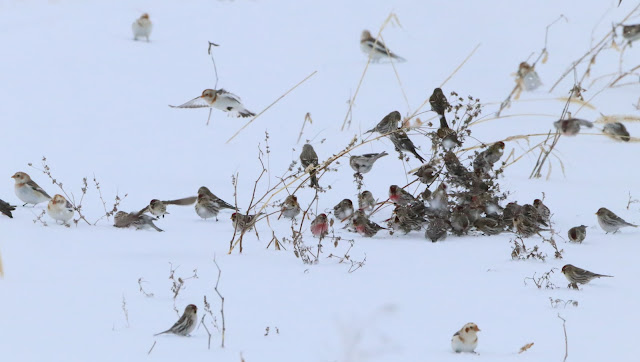 Just north of the Gyr site was a weedy field where the redpolls were swirling about with a mix of Snow Buntings.

flock of Common Redpolls (is there a Hoary in there?)

I was able to get out of the car and sneak up on these birds, busy with their foraging in the snow. 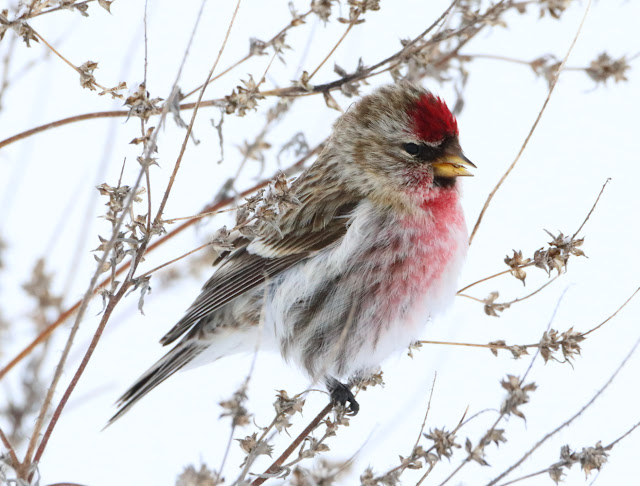 My afternoon visit to the Gyr was only tantalizing. I saw the falcon once swoop through the area, but it never perched for me and I drove away wanting more. 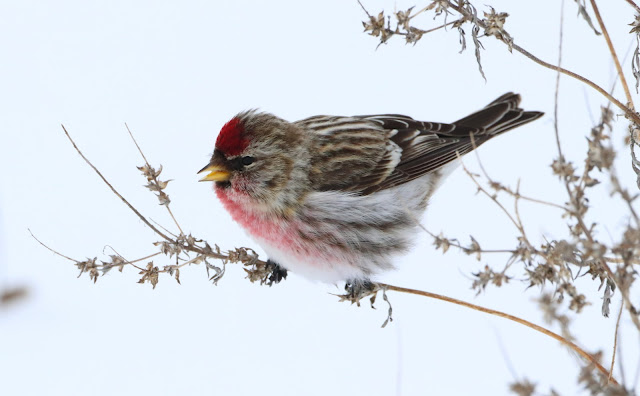 Tuesday morning I departed the motel before dawn in order to get to the Gyr site at the break of dawn, which is rather difficult to detect when the cloud is so very thick. This morning was a mix of snow and sleet. Again, a glimpse of the Gyr, but nothing more.  Luckily, a nice adult male Northern Harrier was casting over the fields—another very beautiful winter raptor.

I had been told by birders in the know that the Gyr probably spends much of the day at one of the big finger lakes east (Cayuga) or west (Seneca), hunting the abundant waterfowl there. People said either 3 PM or 4 PM was the best time to see the bird perched in its favored roosting tree. 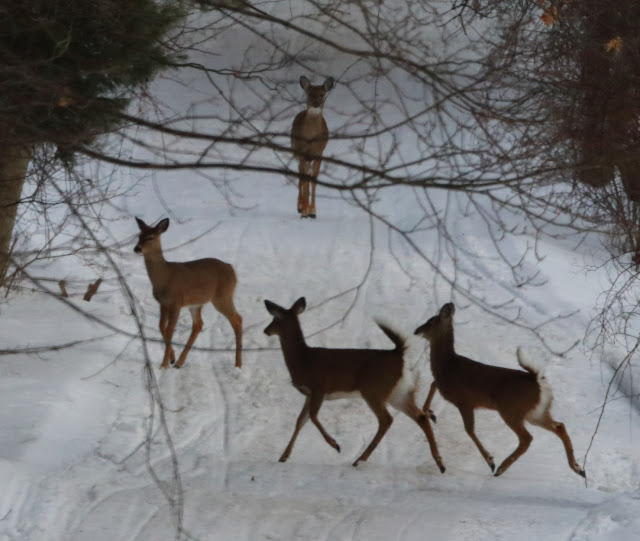 From the Gyr site I drove over to the north end of Seneca Lake in search of a reported Tufted Duck, a vagrant from Europe. The Seneca Yacht club site was Tufted-free, but the Geneva Beach and Boat Club featured a big raft of scaup and Ring-necked Ducks, in which the Tufted Duck, with its bright white flanks and black back, stood out. I scoped the bird within three minutes, in spite of the distance… The drake’s prominent cowlick is a give-away, distinguishing it from the similar Ring-necked Ducks. Some how I managed not to get a decent photo of the pretty drake. Go figure! [To see to partial and lousy images of the drake Tufted Duck, look at the last two images in this blog... ]

After a visit to Ithaca to lunch with my Aunt Carol, also a birder, I returned to the Gyr site in the PM and my persistence paid off. In the sleety-rain, I twice glimpsed the flying bird, and then, finally, I found it perched atop a giant mountain of dirt and rock that was encrusted with snow. Seeing the bird well in flight and perched, I was able to denote that this was the pale-gray morph, which is the color-type that is most often seen in the US (it also comes in an all-white morph and a very dark brown morph—both rare in the US). 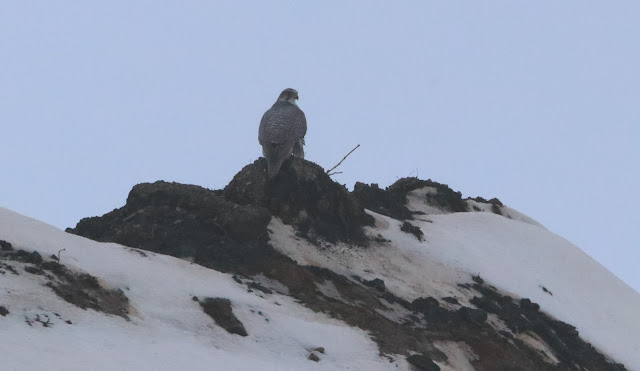 Gyrfalcon atop the mountain of dirt and rock

What a majestic bird—the grandest of the earth’s falcons, breeding only in the high Arctic! I was so fortunate to spend some time with this wily creature… 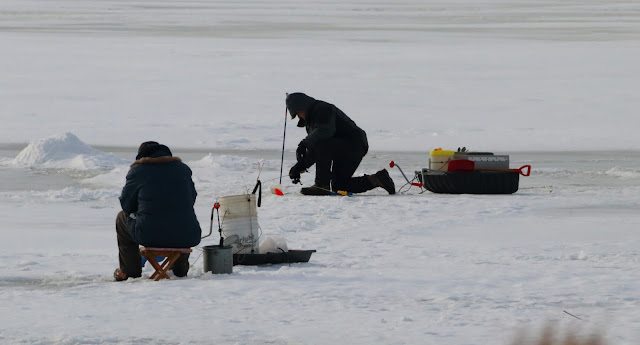 Wednesday was a bluebird day, and my visits to coastal sites along Lake Ontario: Sodus Point, Fair Haven Beach State Park, Oswego Harbor, were disappointing. The rafts of birds tend to disperse when the weather is favorable, perhaps not a surprise! 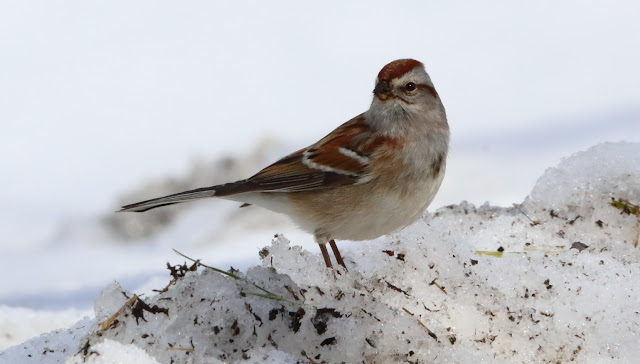 There is lots of coastline and embayments and waterways, but I saw nothing to compete with what I had seen in Oswego harbor on Monday morning. 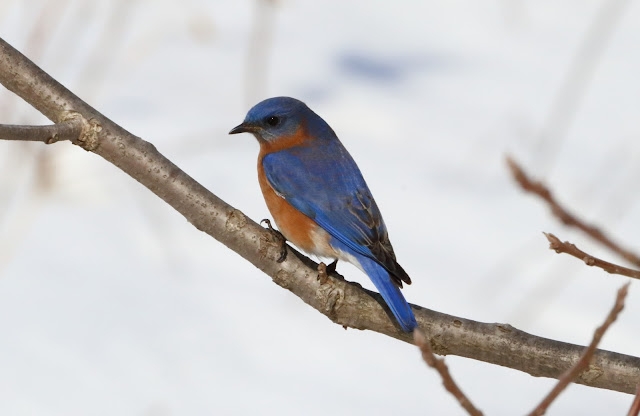 In the afternoon I drove down to Weedsport in search of a Hoary Redpoll, another Arctic rarity. I drove Maiden Lane, just north of the Erie Canal and Interstate 90, in search of redpoll flocks, but no luck. Instead, I found a confiding pair of Eastern Bluebirds, as well as friendly American Tree Sparrows, foraging in the snow. The day became springlike, with temps in the high forties… lots of melting snow and ice! 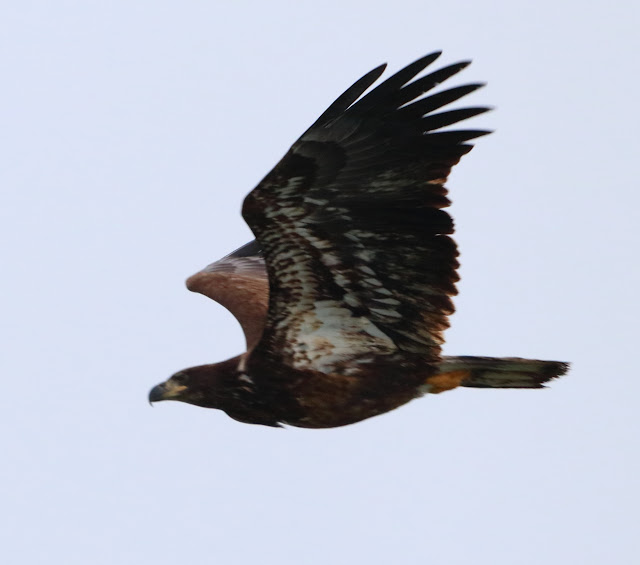 On Thursday the weather reverted to winter with cold and strong winds. The Oswego harbor again became productive, producing close encounters with tidy flocks of Long-tailed Ducks, in which the breeding males, with their trim pied plumage and elongated central tail feathers reminded me of an aquatic version of a bird of paradise!

the various plumages of the Long-tailed Duck, in Oswego harbor

Two drakes and one hen Bufflehead

The gull flocks also finally coughed up a white-winged bird—a subspecies of the Iceland Gull sometimes known as a Kumlein’s Gull. 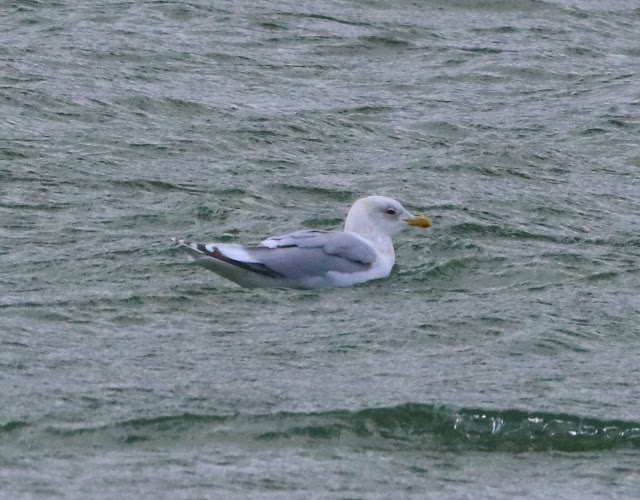 Thursday afternoon I headed back to the redpoll/Gyr zone. It was cold and clear and I was met by Phil Mills and Dave Kennedy and another Gyr devotee, Sean Bragg. The falcon showed up in it favored perch tree at 3:20, stayed a bit, then started moving about. We raced about trying to intersect with the bird’s movements. 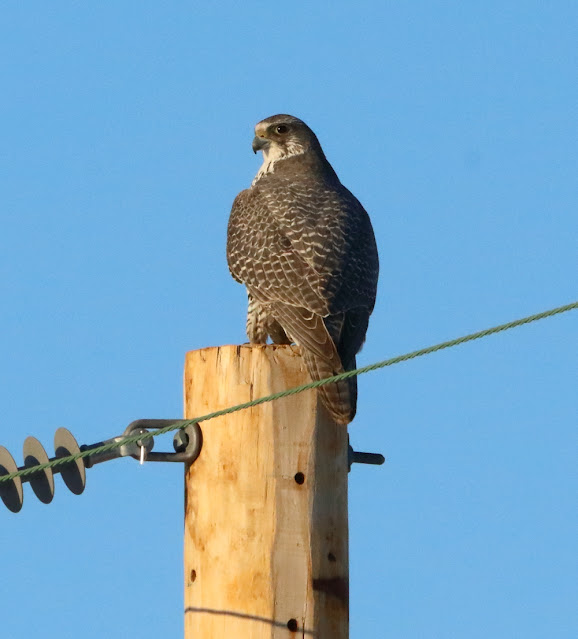 My last and best look at the Gyr

At 4:20 we hit gold, when  Sean found the bird perched on a telephone pole right along the main road. The setting sun illuminated this regal creature. It was a brief but very satisfying encounter with the bird. It then flew east in search of duck prey. I saw it race after a tight flock of flying ducks. In fact, Dave Kennedy had found the Gyr feasting on a Mallard in a farm field the previous evening, close to where we had just seen the raptor. 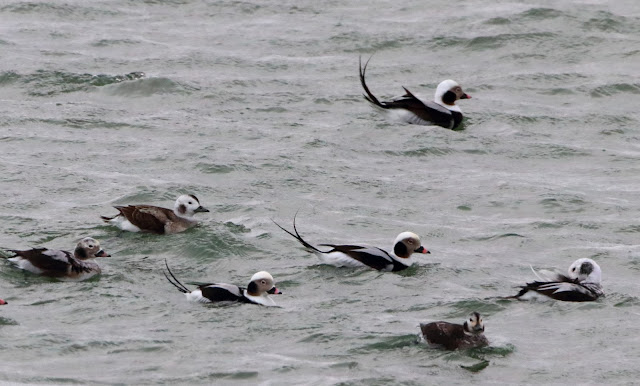 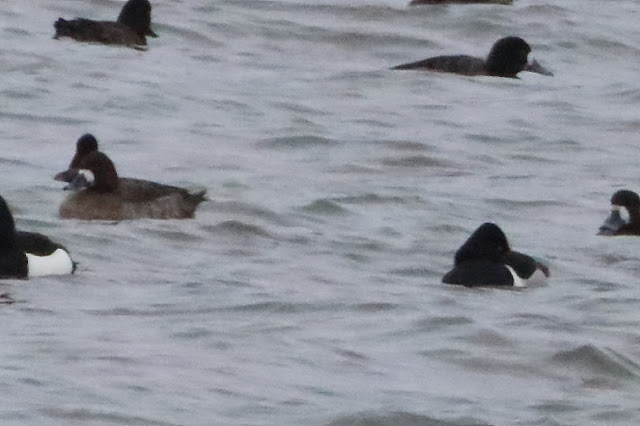 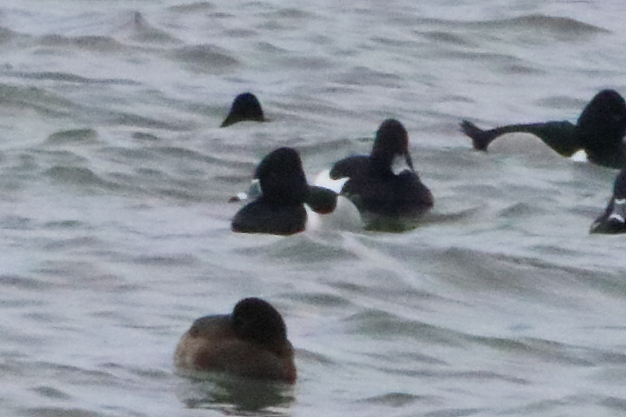 Posted by Bruce Beehler at 6:50 AM