Southwestern Alaska is a wonderful mix of mountains and marine ecosystems—all tossed together in a tectonic jumble. I spent a number of days living right on the north shore of the Cook Inlet, an arm of the Gulf of Alaska, and I also took a day-long boat trip from Seward, sailing south down Resurrection Bay and then around a peninsula and into Aialik Bay and right up to the glacier at the head of that rugged embayment, in Kenai Fjords National Park.

Beluga Whale breaking surface--one does not get to see much

Cook Inlet is home to pods of Beluga Whales, which one can glimpse in bush plane overflights and also when patiently watching from the shore. I saw them on several occasions, just specks of white appearing on the surface of the Inlet, as the creatures popped their heads above the surface for air. 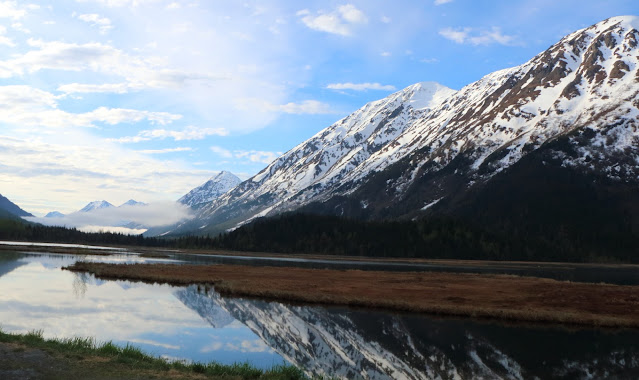 On the 26th of May, Alaska birding expert Dr. David Sonneborn drove me down to Seward to take the six-hour “National Park” boat trip offered by Kenai Fjords Tours. The early morning drive from Anchorage to Seward took us through stunning scenery, first following Turnagain Arm of Cook Inlet, and then down Seward Highway hemmed in by wondrous snow-covered mountains—the Chugatch on one side, the Kenai on the other.

The 2.5 hour drive took us from a dry and warm and sunny day in Anchorage to a cold, gloomy,  and misty day in Seward. This drive takes one from a very dry climate to a perhumid one, where one finds the northernmost rainforest on earth dominated by Sitka Spruce and Western Hemlock. 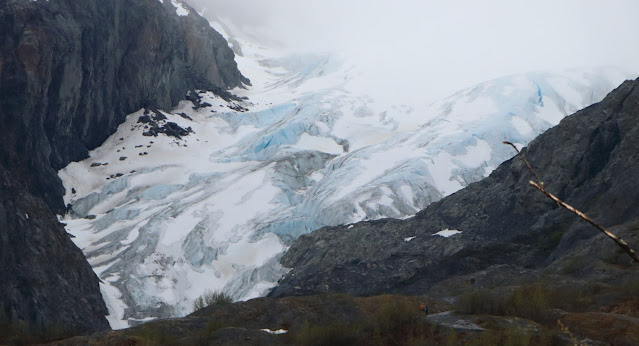 Before the boat ride, David drove me to the Kenai Fjords National Park visitor center, which is situated right below the terminus of the Exit Glacier, which was my first close-up experience with such a massive accumulation of ice. The pale bluish color of the ice is quite fetching.

We brought lots of cold-weather gear for the boat trip, but not enough. The combination of the speed of the boat and the outdoor temperature and humidity made it difficult to weather the outdoor conditions on the boat from long periods of time. We had been hot the day before in Anchorage. On this day we were very cold. Major wind-chill!

The Seward harbor featured Black-legged Kittiwakes, looking a lot like Mew Gulls, which is the common species in downtown Anchorage.  There were also some of the larger Glaucous-winged Gulls (a population that has hybridized with Herring Gulls).

Steller’s Sea Lions populated some of the small rocky islets along the route of our boat ride. These are always a pleasure to watch—they are so variable, from the powerful oversized males to the tiny babies... 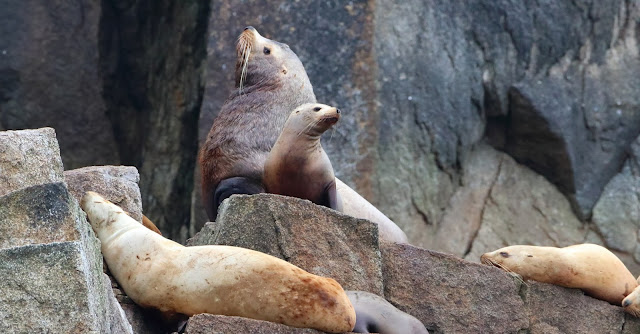 Stelller's Sea Lions at a haul-out

Hump-backed Whales were out and about. I have spent a lot of time with this species off of Provincetown. 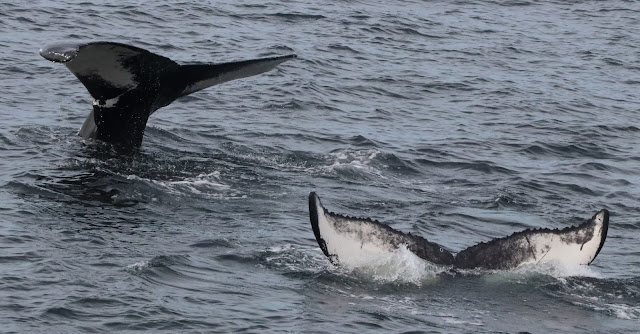 The featured marine mammal was the Orca (Killer Whale) a lifer for me. Pods of Orcas loafed about one particular bay, and I shot a lot of images of them, trying to capture the creatures themselves, not just their fins. That is a tough assignment...

The above image and the five images below are of Orcas 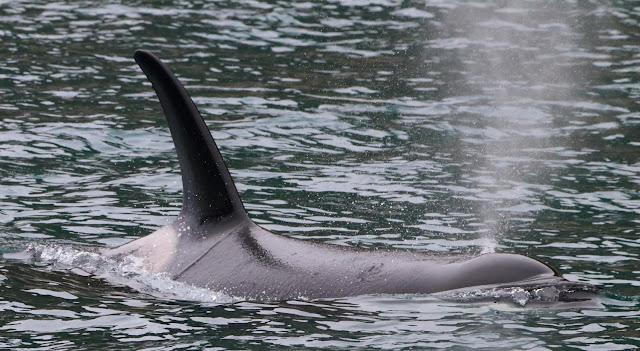 The featured seabirds of the cruise were the Alcidae (auks and allies), of which I encountered six species on the trip. The prettiest was the Tufted Puffin.

The Horned Puffin was also quite pleasing to the eye (and a lifer too!).

The Rhinoceros Auklet was in breeding plumage, and pretty nifty, but not at all confiding. A lot of the alcids would be sitting on the water and then launch off away from the boat as it approached.

We encounter Marbled Murrelets in breeding condition right in Seward harbor, and also in other spots. This species is fairly common in these parts. Lots of rainforest to nest in. 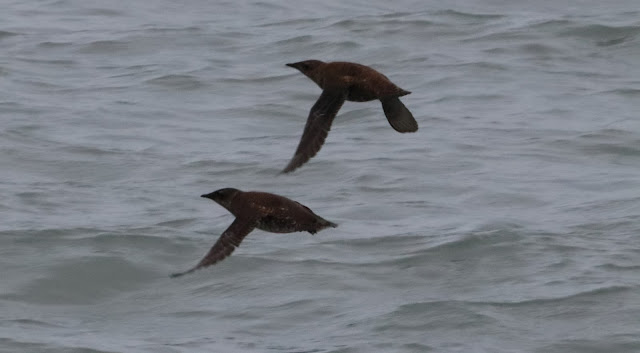 We encountered a few pairs of Pigeon Guillemots, which are handsome, and which closely resemble their East Coast cousins—the Black Guillemot.

Perhaps Kittlitz’s Murrelet was the most exciting bird of the trip. It was a lifer for me, and was one of those species I had not planned to see here...

Kittlitz's Murrelet (above and below) 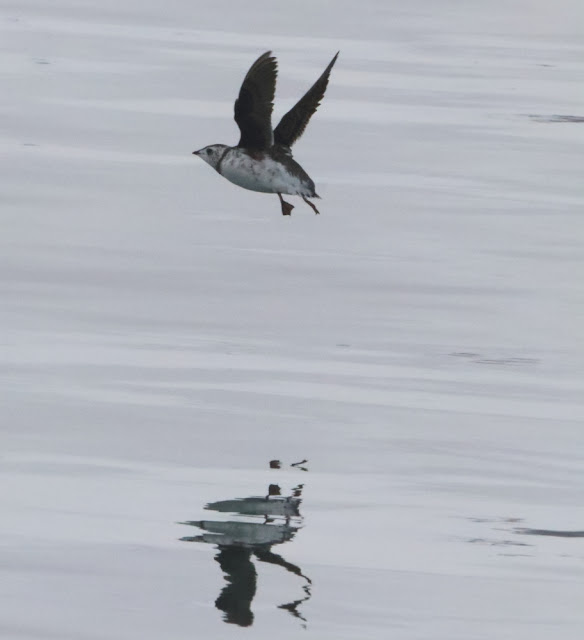 Another surprise to me was encountering two species of storm-petrels (Fork-tailed and Leach’s)  the first whitish, the second blackish with a white rump. Both were foraging low over the icy water up near the calving glacier at the head of Aialik Bay.

I did not see phalaropes on this boat ride, but I had them breeding in the North Bog at Beluga, and I include it here, because it spends most of its life far out at sea. 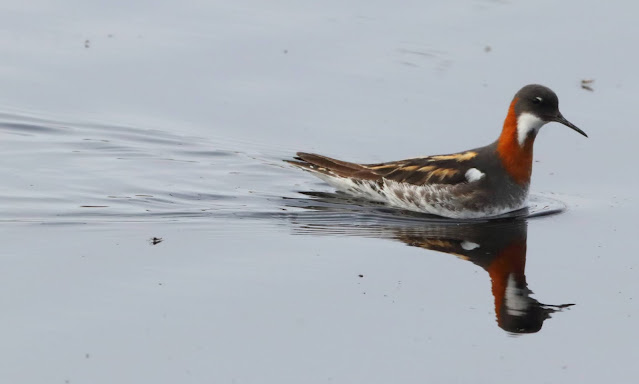 Sea Otters were about and easy to see, flat on their backs bobbing around on the water’s surface. I encountered one large group of perhaps 10 individuals.

Here is the Aialik Glacier that we spent time with. The boat parked and waited for the glacier to peel off some of its ice. The sound of the ice dropping into the water was like thunder—it is very impressive. Geological in its massive force... 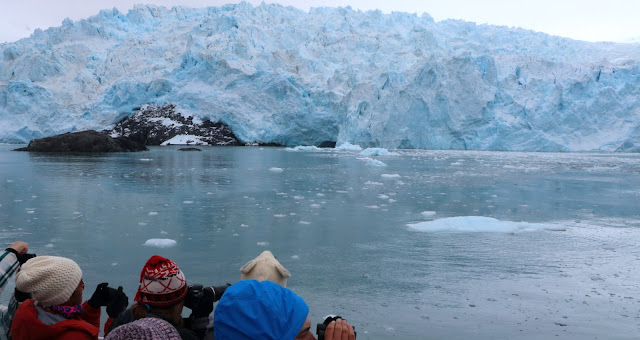 Posted by Bruce Beehler at 5:27 PM